Silva, Cubs Too Much For Astros In 5-2 Loss

Share All sharing options for: Silva, Cubs Too Much For Astros In 5-2 Loss

I want to talk about something positive.

All this losing, all these bad feelings towards Roy, it's trying to obscure why I'm a fan. Why I like baseball so much in the first place. Prospects, home runs, strikeouts, perfect games. The good things about the game.

They've been in short supply around this Astros team. Instead, I've fallen into a trap as a writer. I'm either overly sarcastic when they lose, too detached in the recaps to the losing or flippant about what happened. It's how I'm dealing with lack of things to root for this year.

But, I don't want to do any of that tonight. I want to focus on one good thing from this game. Even though they lost to the Cubs, one of the worst teams they could have lost to, they banged out 11 hits. That's the 25th time this season they've reached double digits in hits. Michael Bourn hit a double for the second-straight game and stole his league-leading 31st base of the season. Nelson Figueroa worked two innings, striking out two and proving himself to be a capable long reliever. Chris Johnson went 2 for 4 with a stolen base and remains the only regular starter with a batting average over .300.

See? That's more than one good thing. Was there anything I missed? Am I being too positive? This WPA graph sure doesn't inspire good thoughts. It's either find a silver lining, though, or let the losses and constant trade chatter eat away at your fan's heart. 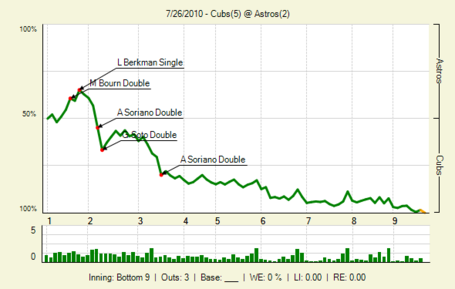