In a publicized start in front of legions of scouts, Roy Oswalt failed to deliver his franchise-tying victory. Instead, he got beat up early and often by this potent Reds offense, though it probably did nothing to hurt his trade stock.

Oswalt left early, leaving the Astros to lean again on a depleted bullpen. Newly imported Nelson Figueroa threw two scoreless innings, as did Gustavo Chacin. Chris Sampson was not as lucky, giving up a run in his only inning of work.

Sampson's punishment may have been a little harsh. After the game, GM Ed Wade announced that Sampson had been sent down to Round Rock and Corpus Christi lefty Fernando Abad had been called up. Abad started some games at the end of last season and to begin the 2010 season, but has not started a game since returning from injury. He figures to be used as another lefty in the 'pen.

The most disappointing part of this game was the offense. The Astros just could not figure out Johnny Cueto. Only Chris Johnson had any success off the young hurler, going 2 for 3 with a strikeout. Both Hunter Pence and Angel Sanchez were 1 for 4 and were the only other Astros to get hits. Cueto lasted eight innings, giving up the four hits and one walk while striking out six. More tellingly, the Astros only managed one line drive off Cueto, meaning they were not making good contact against him all night.

Disappointing may be the best way to describe this season, but it's felt doubly appropriate for this weekend. With no news in the Roy Sweepstakes and the losses against the Reds piling up, it has definitely left my expectations wanting. Do you want a picture to describe that feeling? Try this WPA graph... 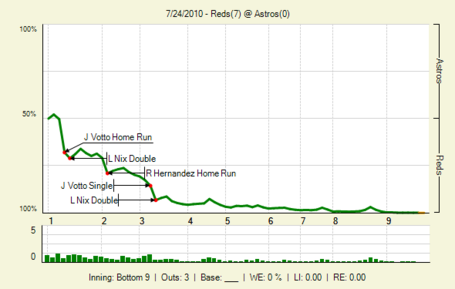