The Astros Have An Outfield Logjam

Share All sharing options for: The Astros Have An Outfield Logjam

In our discussions about trading Roy Oswalt to the hated Cardinals, we touched on some of their upper-level prospects who might be of interest to the Astros.  One name mentioned which I didn't have on my list was Jon Jay, an athletic, MLB-ready young outfielder who can swing the bat a little.

I actually do like Jon Jay as a fringe starter/good bench player type, but there's a reason I didn't include him on my list of Cardinals prospects of interest: We have no need for him.  We are already loaded with similar players in the upper minors.  Exhibit A: 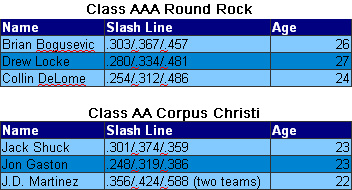 Keep in mind that the ones with the least impressive slash lines, like DeLome and Gaston, have been hitting very well lately and turning around previously poor seasons.

So basically, forget about trading for a fringey MLB-ready outfielder.  If you can get back an elite outfield prospect, that's one thing, but the Astros have no need for a Jon Jay type player.

This does bring up an interesting question, however.  What the heck do the Astros do with all this outfield depth next season?

Trade them away for something the Astros do need.

One obvious possibility would be to deal from this depth to obtain something the Astros have more use for.  It's probably a good idea to think of Martinez as untouchable at this point, but the rest could be available, particularly the older AAA outfielders who don't have anywhere to move up to.

It's unlikely that these types of prospects would be worth a good MLB player, so you're looking at picking up either a bench player, or a fringey prospect at a position the Astros do need to fill.  My preference is the latter; next year should be another rebuilding season, so it's a good idea to take a shot on a guy with an outside chance at becoming a starter.  I'm thinking of a Brock Bond type, as one example; a guy who is probably a utility infielder in the long run, but has a small chance at sticking as a starter in a way similar to someone like Martin Prado.  Or maybe a starting pitcher like Sam LeCure, who has been very productive in the minors, but scouts see as someone with average stuff unlikely to be more than a back of the rotation starter.

In any case, those AA outfielders are going to need to move up to Round Rock next year, and they won't be able to do that with three starters blocking their path.

Trade away an MLB outfielder.

It's possible, though unlikely, that a guy like Bogusevic could be good enough to start for the big league team.  At the very least all three of those AAA prospects could be capable bench outfielders if given a chance.  Trouble is, the Astros are totally locked in at the big league level.  We're stuck with Carlos Lee and his bloated contract and body, while Michael Bourn and Hunter Pence are young, inexpensive, and productive.  Even the bench is pretty much set; Jason Bourgeois has proven himself a useful bench outfielder, and Jason Michaels is serviceable as well.

Perhaps next season Michaels will depart and open up room on the bench for one player, but that still leaves two other prospects who must be put somewhere.  They could become mere organizational players, stuck in the minor leagues until they hit minor league free agency or get selected in the rule 5 draft, but that would be a waste of their value.

So one possibility could be to trade away a MLB player to open up space.  Maybe that would just be a bench player; perhaps Bourgeois will have convinced other teams of his value enough to bring back a grade C prospect with some upside, and could be traded to open up room for a Bogusevic or DeLome.

More drastically, trading away Pence or Bourn shouldn't be entirely off-limits.  I wouldn't do it unless we got a young, MLB-ready cost-controlled player of similar value, at a position where we have greater need (I'm thinking of a player like Reid Brignac or Jeremy Hellickson of the Rays).  Since teams are usually hesitant to do deals like that, and the Astros probably view Pence and Bourn as the faces of the franchise moving forward, that's unlikely.

But if it were to happen, the position opened up in the outfield could be used as a trial ground for any and all of these young players; the hope would be to find a capable starter amongst all this depth, but the main goal in trading Pence or Bourn would be to fill a position (like shortstop, second base, or starting pitcher) where we have more need with a good young player.

While the organization has plenty of outfield depth, it's thin in the infield at the upper levels of the farm system.  If the Astros think an athletic player like Shuck or Bogusevic could play second base, it might be worth a shot.  We're also facing a situation where Lance Berkman may depart in the off-season; if that happens, first base may be filled via open tryouts in spring training next season, involving all of these outfielders, plus other players like Koby Clemens.

Another possibility could be to convert Carlos Lee to first base.  His range might not be as crippling there, and that would open a hole in left field, where the bats of all of these players would play better than at first base.  If we started next season with Lee at first base and Bogusevic in left field, I wouldn't be opposed to that arrangement at all.

At the same time, a player like Shuck has a lot more value at second base than in left field, so a position change could be explored in addition to another above move, regardless.

What moves are the Astros likely to make?

I don't consider it particularly plausible that the Astros would trade away Hunter Pence or Michael Bourn.  They would probably have to be blown away by the offer to make such a deal.  A lesser trade might be more likely, involving one of the bench outfielders or minor league players.  I just hope they don't sell any of them for cash considerations (and I don't think they will).

Moving Carlos Lee to first might be a possibility, as would position changes for some of these other players.

This might be a good problem to have (for once), but it still needs to be dealt with.  What would you like to see the Astros do?