Astros Outlast Cubs 4-3 in 12 On Winsday

Share All sharing options for: Astros Outlast Cubs 4-3 in 12 On Winsday

Who knew that two of the biggest hits in this game would come from pinch hitters? Certainly, Pedro Feliz' home run in the eighth inning was huge. But, the biggest blow was Jason Michaels' two-out double in the top of the 12th. After another bad bunt by Castro, the Astros were really struggling. How badly they were struggling was evidenced by my delight that Michael Bourn grounded out to second, which moved the runners up a base. That was a good offensive play, in my mind. What have the Astros done to me?

At any rate, Michaels came through with a big hit and Angel Sanchez came up with his own even bigger hit, singling to center field to score Michaels. That grew in importance when Gustavo Chacin struggled to close out the game. A two-run home run to Geovanni Soto brought the Cubs within one as the radio guys were saying things like, "Chacin just looks out of gas....He looks like he can't throw anything." Exactly what you want to hear.

Which is a shame, since the Astros squandered a great start by Brett Myers. The eminently tradable starter extended his club record by pitching through the sixth inning for his 20th straight start. He was also in a strikeout mood, ringing up eight Cubs while walking only two. In fact, Myers only gave up five hits and lowered his ERA to 3.24.

He didn't get the victory; that went to Brandon Lyon, who worked out of a bases-loaded jam in the 11th inning and struck out three over two innings. Gustavo Chacin got the cheapest save possible, allowing two runs and barely escaping with his third out on a hard-hit ball to Hunter Pence in right.

Still, a win's a win. Especially coming on Winsday, as it did today. 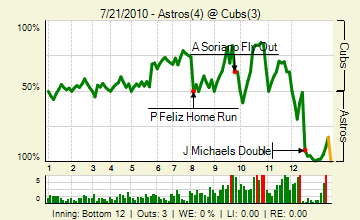