This game was about the incredible starting pitcher's duel that took place for seven and a half innings. Roy Oswalt and Matt Latos put on a clinic that managed to put this game in the books in two hours and seventeen minutes—a true blessing for the central/eastern time zoners among us. Oswalt tossed seven innings of shutout, three hit ball, striking out seven and walking two. Latos went an extra inning, but also kept a shut out while walking none, striking out seven and surrendering four hits.

It was a marvel to watch. Until the wheels fell off, that is.

Brandon Lyon came out in the eighth and seemed poised to cruise through yet another relief outing until David Eckstein gritted his way into an two out, RBI double. There are few things in life that rankle me more than that occurrence. I don't like Eckstein. He was a Cardinal, he draws all the typical announcer mythology out, and more than anything, his constant fidgeting just makes me think of the Danny Devito as the Penguin in Batman Returns.

It's an unfortunate way to lose a ball game that was so artfully dueled by the apparently snakebitten Roy Oswalt. As you look over this WPA chart, know that I likely will get no rest this evening as visions of David Eckstein playing the part of the Penguin run through my head. 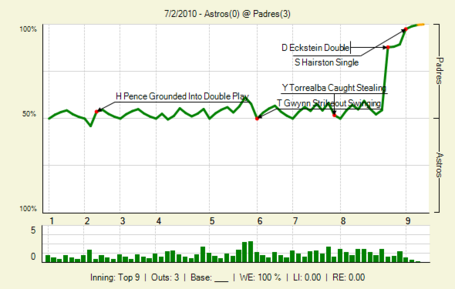