Clutch patience propels the Astros past the Padres

Share All sharing options for: Clutch patience propels the Astros past the Padres

Brian Moehler was effective in 5.2 IP, exiting the game having only surrendered one run. The issue for Moehler is that his .153 WPA from the mound only slightly overshadowed the unfortunate circumstances he found himself in at the plate. Twice coming up to bat with RISP and two outs, Moehler left'em stranded and was a dismal -.126 WPA from the plate. It was an issue for Moehler because the two run lead the Astros had at his departure was not enough for him to stay as the pitcher of record (not that I care whether he pads his record other than I could be asleep already, just that probably he does).

This was a hard game to watch. David and I conversed back and forth through out the game about why it was so dismal to watch, but for whatever reason—it was a challenge. It became even more challenging when it became clear that the baseball gods were going to punish we of the Central Time Zone by taking this game to extra innings.

When Luke Gregerson came out for the 10th inning, I set my alarm on my cell phone. Busted out a blanket for the couch and settled in assuming this game would go on for innings and I would likely fall asleep. As JD and Brownie drooled over Gregson's gaudy peripherals, I closed my eyes assuming I might as well accept the inevitable.

All the sudden I heard something about Humberto Quintero drawing a walk. Q, drew a walk against a guy who had only walked four batters all season while striking out fifty-nine. Then Navarro was keeping his bat on his shoulder and we had two on, two out for Michael Bourn. David sent me text prediciting that if Bourn went yard here that the very fabric of space/time would rip. Luckily for us, Bourn was about 100 ft short of that. Thankfully, though, it was enough to drive in two and see Bourn speed into 3B standing.

Strange happenings for sure, but at least it makes for an interesting looking WPA graph: 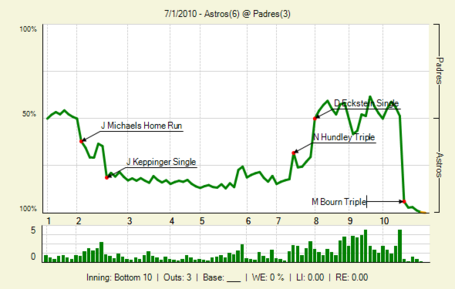