Trade Deadline Nears for Astros: Are You Prepared?

Share All sharing options for: Trade Deadline Nears for Astros: Are You Prepared? 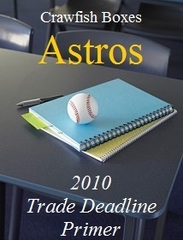 That's a little dire, especially since we've done a pretty good job of breaking down most trade scenarios here at TCB. I did want to tell you about a little project I helped out with and how it can better inform you on the deadline. The guys over at TwinsCentric, a group of four local Twins super-bloggers who have combined forces to publish e-books and magazines focusing on the details of Twins baseball. In addition, the Trade Deadline Primer will include contributions from 29 other respected bloggers and independent baseball writers, providing detailed knowledge of their respective teams.

It is a 100+ page e-book (in the form of a pdf) that provides a preview and framework for all of the upcoming trade deadline speculation. It is graphically-sparse, consisting of headshots and simple graphics. But it is content-rich, evaluating the action from a fan’s perspective while providing national coverage. This includes:

The other cool thing about this is that the one you'll be able to buy will be specifically tailored for Astros fans. It'll have Astros content front and center, will be focused on the NL Central and have quite a bit of content from yours truly. That's somewhat unique in these kinds of publications. I've seen the advance copy and am pretty excited to have contributed to it.

I'd like to provide a free preview of the content on here, but I'm not sure I'm allowed. But, I do want to tease your imaginations with a description of the essay I wrote for the book. It's about Lance Berkman and Roy Oswalt being the "Faces of the Franchise" without us ever really identifying the team with them for as long as Jose Cruz or Bagwell/Biggio. Some pretty interesting numbers and conclusions that I drew and hopefully will be worth your time.

The book will cost $9.99 and will be available for download here as a .pdf. I'm not comfortable being a self-promoter, so I'm not going to beat you over the head with this book. I'll bring it up now and one other time, but mainly wanted to make you aware of it. As John Bonnes, one of the TwinsCentric guys, wrote in his letter, every writer that contributed to this has a full-time job besides writing for their respective sites. We're not looking at this book as a way to make enough money to retire early. Instead, it's much like our sites; something we put lots of time and energy into for the readers. That's why I really hope this little venture is successful.

I said I'd bring it up one other time. That's as a payoff to this contest. I'll set up another Google Form for you to enter what you think Michael Bourn's stat line will be in the All-Star Game on Tuesday. Will he even get in the game? Will he steal a base? As a tie-breaker, you'll also predict the score of the game. The winner will get a free copy of the ebook, so provide your email address on the form so I can send it to you.