As the poet Shaquille O'Neal once said:

Maybe the Rockies will think twice about pitching around Berkman to get to Carlos Lee next time. That colossal clout of his in the top of the 10th inning was maybe the biggest hit of this young season for the Astros. It was also the first home run in this four-game series and set the Astros up to do no worse than split with Colorado

I'll take that. I'll also take another shut-down performance from The Bearded One. Felipe Paulino has quickly become my favorite starting pitcher this season. His stuff has been electric and it's fun to review on Pitch F/X. He's got a rockin' beard, which always gets bonus points in my book AND he doesn't give up hits like they're strippers at a bachelor party (looking at you, Brett).

Seriously, though, Paulino is pitching like we hoped Bud Norris would at the beginning of the season. I am so happy he beat out Brian Moehler for the fifth rotation spot this spring. More importantly, it's been a rare thing for Houston: a homegrown player contributing big-time at the MLB level. I like seeing that, especially during draft week.

Back to Lee's heroics. It was probably the right call to walk Berkman in that situation. The outcome, however, was something the Astros haven't had happen this season. A middle of the order hitter made the other team pay, and pay dearly. Since Lee was hitting .226 coming into this game, it's safe to say we were all shocked that he came through. But we shouldn't. He's paid to hit and he needs to start coming through. 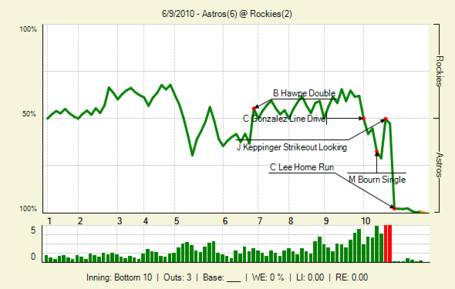 Just look at that thing. Notice how more and more of our WPA graphs have been pretty even or in the Astros favor for much of the game? This must be that "regression" thing all the smart kids talk about.