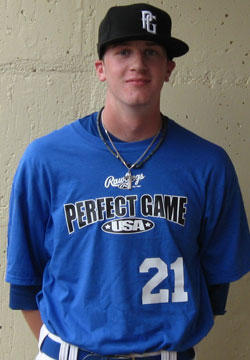 He Grills, he sizzles...Okay, enough with the bad puns. The 6-foot-4, 205 pound lefthander has pitched for the Canadian Junior National team for four years now and came into this spring as the top prep player from Up North. Shoulder issues knocked him down to the 10th round as he lost some velocity. His fastball has been sitting around 86-88 MPH and could gain some velocity as he matures. After all, the kid was born in 1992!

He also has a very nice curve ball that could be his out pitch given some polish. His changeup needs work but it's something the Astros will no doubt work on. With both his offspeed pitches, he sees a 10 MPH change in velocity from the fastball, so even though he's not a hard thrower, he changes speeds well.

Another fun little factoid? Grills and the Canada Junior National team played against the GCL Astros last season. So, the Astros got a good chance to scout him back then. They must've seen something they like.

As with Shirley, his basement level is as a LOOGY, though Grills may struggle to get outs without a decent out pitch. His curveball can be deadly on lefties, but without control over it, he'd be hard pressed to get them out consistently.

Someone compared him to a young Wandy Rodriguez, and that seems about right. He'll never be a super-hard thrower, but his curve has the potential to be his best pitch. From the left side, that makes him middle of the rotation talent.

Here's the weird thing. Grills is committed to San Jacinto JC. I have no idea how a Canadian player ended up down at a junior college in Texas, but he did. I wonder if that translates over into a fondness for the Houston area, and would thus make him more signable. Sounds like he's comfortable going to junior college, though, so don't expect this negotiation to be easy.