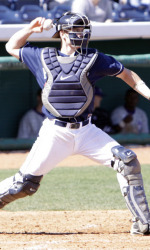 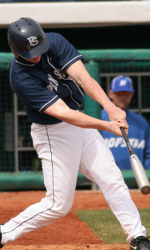 The 6-foot-2, 220 pound junior was a semifinalist for the Dick Howser Award, given to college baseball's top player each year. He was also named a Louisville All-American and a semifinalist for the Johnny Bench Award, honoring the nation's top catcher. There was only one other catcher to make the Howser list as a semfinalist.

Heath also broke Penn State's home run record, hitting 19 in 198 at-bats. He also had 16 doubles and one triple while hitting .398 at the plate with a .451 on-base percentage. He walked 31 times and struck out 38 times, both pretty good rates for a catcher. This was the first season he's gotten serious playing time, as he walked just eight times in 97 at-bats in 2008 and played almost never his freshman year.

He did play in the Big Ten, which had a down year talent-wise. Against first-round pick Alex Wimmers, Heath was 1 for 3 with a walk and a strikeout in their only meeting. He also faced Texas A&M's Michael Wacha, who was an All-Big 12 honorable mention, and was 1 for 4 with two strikeouts. That's not a lot of evidence about his batting skills, but it appears he's got a little bit of pop.

Watching the little video available on his swing, it looks busy, but he's still in a good hitting position and seems to pull his hips through well. That means he's not just relying on his upper body for his strength. Also looks like it has a bit of a natural uppercut, but can get long at times.

His defense will need work. He improved a lot in his first full season behind the plate, but he needs to maintain good flexibility for his arm to play well. His bat is definitely his strength, and if he can't refine his skills behind the plate, he might have to move off the position. Worst-case, he becomes a first baseman with a little pop. Of course, that's also assuming he can hit with wooden bats. He didn't play in the Cape Cod League last season, but may have played in another wooden bat league that I can't find.

With this kind of power, if he can stick at catcher, he will be a major asset. His bat seems to be his best tool, which means he profiles differently than someone like Lou Santangelo, who's only about power. Best case scenario is that he turns into Gary Carter, hitting 25-30 home runs with good defense. He might also break the Houston club record for home runs in a season, currently held by John Bateman.

Seems likely. Yes, he is a junior with only one year of starting under his belt. The way his stock has risen, though, I don't know that he could necessarily improve by going back to school. Seems like he'll sign for a nice slot number and become the second best catching prospect in the system.