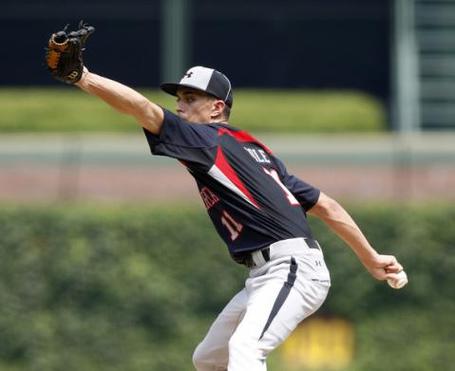 Every year, there are draft prospects who were considered consensus natural first rounders entering into the draft, but somehow free-fall all the way to the second round or later.  This season is no exception, and as we enter the second round of the draft this morning, there will be some very good prospects left on the board.

Let's profile some of those players still remaining, and some other interesting prospects who were projected in the supplemental through third rounds.  Instead of a full draft profile, we'll make this quick and give them a paragraph each.  All information based on Andy Seiler's (MLB Bonus Baby) excellent draft notebook.

1. Stetson Allie, RHP, St. Edward HS.  One of the hardest throwers in this draft class, Allie's fastball touches 101mph, and he has a plus slider.  His changeup and command are questionable.  Allie has true No. 1 starter upside, but is more likely a closer at the next level, which may be why he dropped so far on draft boards.  See David's full profile here.

2. Brandon Workman, RHP, Texas.  David already profiled Workman here.  Despite some injury concerns, he remains a relatively safe bet to become a true No. 3 starter, and would be a much better pick in the second round than he would have been in the first.  His solid four-pitch mix features a low 90s fastball and one of the best curveballs in the class.

3. Brett Eibner, OF/RHP, Arkansas.  Another prospect David profiled, Eibner is an interesting two-way player.  Previously drafted and failed to sign by your own Astros in 2007, Eibner is the best of three such prospects.  He could be a No. 3 starter or a middle of the order bat, but is not a safe bet to reach either outcome.  Off the mound, he has a fastball which touches 97mph, a plus slider, and an average changeup.  As an outfielder, he has plus raw power, but questions regarding his hit tool.

4. A.J. Cole, RHP, Oviedo HS.  Having already dropped surprisingly far on draft boards, Cole shouldn't wait much longer to hear his name called.  One of the best prep arms in the class, he features a fastball clocked as high as 98mph with projection left in his frame, a curve which projects to be plus, and a solid-average changeup.

5. Austin Wilson, OF, Harvard-Westlake HS.  A very divisive draft prospect, Austin Wilson is perhaps the "toolsiest" player in this draft class.  He's a true five-tool player and has the upside to become a superstar, to the point where some consider him one of the ten best prospects in the class.  The downside is that he struggles quite a bit with pitch recognition, although his excellent makeup and work ethic could help him make adjustments to alleviate that problem.  The real reason he free-fell out of the first round is that his Stanford commitment makes him a tough sign, and he will demand a large bonus to break him free from his college scholarship.

6. Yordy Cabrera, SS, Lakeland HS.  Cabrera is a hulking high school shortstop with tremendous raw power and above average hit tool driven by his excellent bat speed.  He's one of the few remaining players with the upside to become a true middle of the order bat, and he draws comparisons with a young Miguel Tejada.  The bad news is that he shares Tejada's easy willingness to go out of the zone after bad pitches.  He will likely move to third base as a pro, but he has the bat to play there.

7. Jedd Gyorko, SS, West Virginia.  One of the most productive college hitters in the country, Gyorko isn't the toolsiest player on the board, but his plus plate discipline and 1.222 college OPS in 2010 draw attention.  He'll move off shortstop as a pro, but may stick at second base.  He profiles as a very good No. 2 hitter, with high OBP and some power.  We joked that Kvasnicka might be the Youkilis of this draft class, but Gyorko is the one who really fits that profile, and I wouldn't be surprised to see him show up the scouts and hit for much more power than they expect.

8. Reggie Golden, OF, Wetumpka HS.  Golden's name was linked with the Astros prior to the draft, and it's easy to see why.  He's toolsy, athletic, and very raw.  He has plus raw power, but his hit tool is questionable.  His bat will play up if he can stick in center field, but he's more likely destined for a corner as a pro.  See David's full profile here.

9. Sammy Solis, LHP, San Diego.  In a class weak in left-handed pitching, Solis stands out.  He has a low-90s fastball, a plus changeup, and an above average curveball, making him a fairly safe bet to become a solid No. 3 starter at the next level.  He may even have a little projection left in his frame, giving him an outside shot at being better than that

10. Kris Bryant, 3B, Bonanza HS.  One of the most powerful hitters in this college class, Bryant's raw power grades out as plus-plus.  His swing and pitch selection are big question marks, and he won't be better than average in the field, but if he can put everything together, he has the upside to become a true middle order hitter.

What other prospects interest you in this draft class?