Astros Take Mike Foltynewicz With The No. 19 Pick

Share All sharing options for: Astros Take Mike Foltynewicz With The No. 19 Pick 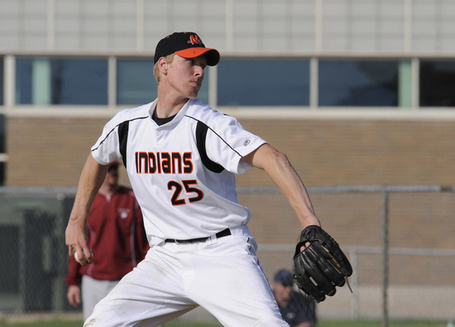 We didn't do a profile on Folty, so let's break him down here.

The 6-foot-4, 190 pound righthander is out of Minooka Community High School in Illinois. it seems while we were all focused on the Southeast area for draft prospects, we forgot about the area that Tanner Bushue came out of. Foltynewicz (hereby known as "Folty" for my typing purposes) has a great arsenal of pitches, with at least three above-average ones. He's also a classic cold-weather guy. He's just started coming on strong late in his high school career and has a lot of projectability.

His fastball currently sits around 93 MPH and has touched 96. His frame looks like he can still add some MPH too, so he's a very hard thrower. His windup has been described as a little like Tim Lincecum, which is why some teams may have stayed away, but I don't see it. I love his delivery. It's clean, it's effortless and is easily repeatable. . His curveball is a great pitch, much like Bushue as well. He has a slider, but it's apparently not a great pitch and the Astros may scrap that at first to take the pressure off his arm. His change has really developed in the past season, which tracks with his cold-weather status. The really promising thing here is that both his fastball and his change have great late life. Which means he's got a good shot to get big league hitters out even if he loses velocity.

He's also pretty athletic, finishing in a good fielding position. He's got a pretty strong lower half and clean mechanics, from what I can see. Overall, he's exactly the kind of arm that Heck has targeted. He'll join Lyles and Bushue at the top of the organizational chart.

He's a closer if he can't stick in the rotation. The height and the speed mean he can survive even if he only keeps one breaking pitch in the big leagues. There don't seem to be many injury concerns with him, so the main question is how much velocity will he lose pitching every five days.

He can definitely be a No. 2 starter. He has the frame to take a big workload and has up to four pitches that he can use. I can see him starting out in Lexington next season and making it to Double-A by 2012.

This is the only thing that is concerning. Andy Seiler thinks that he's pickable, if he went high enough. Joe in Birmingham also saw an interview where Folty would need "life-changing" money to sign. I wonder if this was the pick Drayton had in mind when he said the Astros could go above slot. I could see Folty signing for 2 million and thinking that's life-changing. Being from Illinois, I don't think Texas would have the same pull as someone from Central Texas. I could be wrong, but I think the college scholarship was more a placeholder than a dream.

Full draft coverage can be found here (over flow thread is here). Video after the jump.

Foltynewicz -- I'm told it's ?fole-TIN-eh-vitch,? but scouts all refer to him as ?Folty,? and who can really blame them -- is the best high school arm in the upper midwest this year, an area that can be a little underscouted because of the weather and late-starting high school seasons.

He's primarily fastball-change-slow curve, and he trusts his offspeed stuff, using the curve and changeup in two-strike situations and against hitters on both sides of the plate. He's hit 95 a few times over the last several years, but will sit more 89-93 now while just flashing that better velocity. He takes a moderate stride, and everything about his delivery is quick and purposeful, from his first move toward the plate to his simple, short arm action.

He's committed to the University of Texas but should be a top-fifty pick if he's signable there.

Mike Foltynewicz is a tall, projectable right-handed pitcher from Minooka Community High School in Minooka, Illinois, a far southwestern suburb about 50 miles outside of Chicago. Foltynewicz has really come on strong this spring, and it’s looking more and more like he’ll be a top prospect in short order. He seemed to get better and better every time scouts saw him, and I wouldn’t be surprised to see him jump into the natural first round. He features an arsenal of multiple above-average pitches, and I see his ceiling as that of a true number two starter, capable of shutting down Major League offenses. His fastball is his best pitch, a true 92-94 mph offering that touches 96, and he has the frame to add even a tick or two more. His delivery is reminiscent of Tim Lincecum’s, though he doesn’t get the same extra-long stride that Lincecum incorporates in his back-to-the-plate windup. He does get excellent late life on his fastball and has average command, making it a plus to plus-plus future pitch. He uses a pair of breaking balls in a curveball and slider, but his curveball is the better pitch. It’s an upper-70s pitch that has great power and late break, getting above-average future grades from scouts. His slider is an 82-84 mph pitch with some tilt, though it’s more of an average show-me offering than a Major League quality pitch. His changeup advanced more than his other offerings this spring, and it has received a few future plus grades due to excellent fade. With all this progress, "Folty" now projects as a supplemental first or second round arm, perhaps even as high as the natural first round as I said above. A University of Texas commitment shouldn’t be a factor if his name gets called that high.