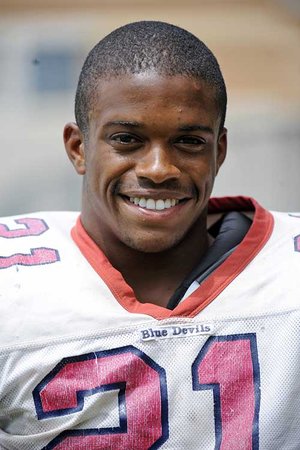 The center fielder from Woodland Academy in Georgia was profiled here.

What else do we need to talk about with DeShields? First, the Astros took him too early. No one expected him to go this high, but the Astros fell in love with his athleticism and knew he wouldn't make it to No. 19. So, they lock up the one player they can't do without and hope for the best later in the round.

I don't like this for the same reasons that it bugs me when someone picks a kicker in the eighth round of a fantasy football draft. The Astros aren't working the value the right way. There were players available at No. 8 that have skill sets they won't be able to get later in the draft. Namely, there are guys who will hit for more power.

Still, I like DeShields. He's got some great skills. He's as fast as any player in the draft, which gives him a great offensive skill set and great range on defense. If the Astros can turn him into a second baseman, he could be a force behind Michael Bourn in the lineup. His bat should also develop, though his power might not be there. I'd be okay with 10 home runs a year if he's stealing 60 bases and hitting .310.

The other, rather large question about DDJ is how much money he'll want. He's got a football scholarship to LSU and it looks like he's into football enough that he might not sign. That gives him a ton of leverage. The slot price at No. 8 is just over 2 million dollars. Who knows how much he'll ask for, but can the Astros sign him if he wants 4 million? Is he worth going over slot for in the long run? Or would that money be better served in the later rounds? I don't know the answers to those questions.

It feels like the Astros didn't work the system well on this one. But, that was also the case in 2008 with Jason Castro and 2009 with Jiovanni Mier. I'm inclined to go with Bobby Heck most times, but there were better players with fewer question marks than DeShields. The top of the draft should be about minimizing risk in a risky business. That's the benefit of picking high. With this pick, I don't think the Astros accomplished that.