Share All sharing options for: Myers and Lee Lead Astros Past Cubs 6-3

I was on kid duty this afternoon, so I only got to watch bits and pieces of this game as I passed through the room where it was on TV. Before we get to the specifics of the game, I'd like to digress about Cubs fans.

I don't like them. Well, I guess I just don't like the team. I don't like all the "poor me" talk, or the bandwagon fans, or the fact that WGN shows them all the time. Every time they come to town, Cubs fans flood MMP and I REALLY don't like that.

My dad used to ask me why I disliked the Cubs so much. After all, he'd say, they haven't won in forever. Why bother disliking them? Basically, it's because the Astros play them so often. Familiarity breeds contempt. But, it's deeper than that. It's all the things I mentioned and how their fans never seem to consider us a legitimate team. That's a generalization, for sure, but it still bugs me when I see it.

In 2003, when Steve Bartman struck the righteous Cubs down, my dad wondered why I'd root against the Cubs in the playoffs if the Astros are out of it. He's the kind of fan that will pull for the NL in the World Series or the AFC in the Super Bowl just because that's the division in which a Houston team plays. I'm not like that. I was rooting for the Marlins in '03 and against the Steelers any chance I get. My dislike of teams just can't turn off because of the playoffs. Maybe I'm in the minority of fans, but I'd be interested to see what you think. Do you dislike the Cubs? If so, why? Will you still pull for teams you dislike in the playoffs?

Now that that's out of the way, let's get to the game. Brett Myers threw 6 2/3 innings, allowing two runs and eight hits while striking out six and walking one. More importantly, Myers helped push the Astros' win probability over 90 percent by the middle of the sixth inning. Myers gave up hits, as he has all season, but was able to avoid getting hurt by them.

Matt Lindstrom also came in and shut down the Cubs in the ninth for his 13th save of the season. He's on pace for 37 saves this season and bounced back from a couple bad outings. He did give up two hits, making things interesting, but was able to get out of the jam.

Questions about the bottom of the Astros lineup are fair, but when the middle of the order is hitting line they did Sunday, those questions disappear. El Bufalo hit a home run, Hunter Pence was 2 for 3 with a steal while Lance was 2 for 4. Even Pedro Feliz chipped in, going 1 for 4 with 2 RBIs. Add in Keppinger's daily 2 for 4 performance and the offense is clicking as well as hit has all season.

That's 6 wins in the last 8 games for the Astros and the first time since April that the Astros have won back-to-back series. Back then, they won three straight series to put that nasty nine-game losing streak to start the season. Is this the start of another mid-season surge? Maybe if they play the Cubs some more. For all their griping, two of the six series the Astros have won came against the Northsiders. Oh, and the Astros are only three games behind them in the standings.

Again, let's marvel at the beauty of that WPA graph, how high it was after Lee's home run and how it stayed up for most of the game. The Astros of 2010 don't play many games like this. 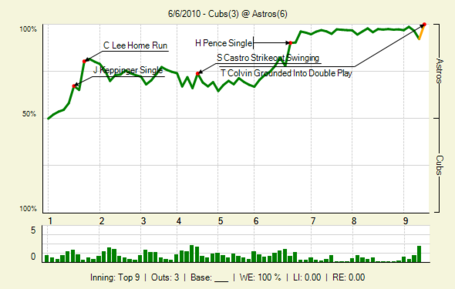