Share All sharing options for: THUD...Cubs Bring Astros Back To Earth, Win 8-5

The bigger the winning streak, the harder they end. I didn't expect Roy Oswalt to give up six runs in 7 innings of work. I also didn't expect him to strike out just one Cub. That's how it goes, though.

Take the fourth inning, when Chicago took the lead for good. It started out with Roy's only K, getting Tyler Colvin swinging. A single and a double put men on second and third with Aramis Ramirez up. His ground ball should have gotten the second out of the inning and held a slow Derrick Lee on third. But, the ball slipped by Tommy Manzella's glove into left field, scoring Lee.

Alfonso Soriano followed with a sacrifice fly, scoring Marlon Byrd to take a 3-2 Cubs lead. It wasn't all luck that got Oswalt, as he gave up an absolute bomb to Tyler Colvin that found the second deck in right field. That gave the Cubs an 8-3 lead.

On top of everything, the Astros actually scored some runs for Oswalt. Michael Bourn manufactured a run in the first inning, walking to lead off the game before stealing second and taking third on a Keppinger groundout. Lance Berkman's single to center field allowed Bourn to stroll home.

Keppinger also had a solo home run in the third inning, while Humberto Quintero was 2 for 4 with a home run, a ground-rule double and two RBIs. It was the second time in three days that an Astros catcher hit a home run. Since the Astros trio of catchers in Quintero, Kevin Cash and J.R. Towles had two home runs combined all season, the two dingers was a veritable power surge. Oh, and you can add Pedro Feliz to the offensive attack, as he went 2 for 4 and brought his average up to .229.

If the Astros had been a little closer in the end, they might have had a chance in the ninth inning, when they scored two runs. The bottom of the order rallied, but the Cubs brought on Carlos Marmol to shut things down and ensure their 25th victory of 2010.

I'll leave you with the WAR graph, which looks like a mirror image of last night's game. In a "Spock has a goatee" bad way. 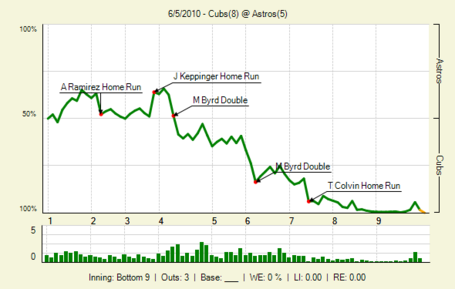