It was a night of redemption at Minute Maid Park on Friday.

Felipe Paulino (1-7) picked up his first victory of the season, throwing 120 pitches in eight innings of work. He allowed five hits and one run while striking out seven and walking one. Art Howe said Paulino's slider was a "J.R. Richard-type" slider. Pretty high praise. Center fielder Michael Bourn went further.

"To tell you the truth, I don't deserve to be the player of the game tonight," Michael Bourn said after the game in an interview with Greg Lucas. "I'd give it to Paulino. He was dominant tonight and had good stuff. He's been deserving of his first win for a while. We haven't been able to score behind him, but we scored enough tonight for him and he was able to hold them down."

How nasty was his stuff?

Look at those whiff percentages! Over 20 percent on both the change and the slider? When he threw almost 80 percent of his sliders for strikes? Yeah, that was a nasty pitch.

On top of Paulino's dominance, the Astros got a bounce-back save from Matt Lindstrom, who faced the minimum while striking out one. Lance Berkman and Michael Bourn were both 3 for 4 and they both had a steal. You read that right. Lancealot stole a base. It was that kind of game for the Astros, when everything went right. Those are the kinds of things that haven't happened as they fell to a 21-34 record.

On the other side of the field, it was also a night of redemption for Carlos Zambrano. In his first start since being reinserted to the rotation, he threw 84 pitches in 4 1/3 innings, while giving up six hits and three runs. The Cubs then used five relievers to shut down the Astros over the next 4 2/3 innings. Former first-round draft pick Andrew Cashner also worked a scoreless inning, giving up a hit while striking out one.

I'll take this one. With all those Cubs fans filling MMP, it's nice to shut them down so completely. I'll leave you with a very nice looking WPA graph. Notice the Astros only had less than a 50 percent chance of winning once and that quickly was erased. To get a Cubs fan perspective, head over to Bleed Cubbie Blue. 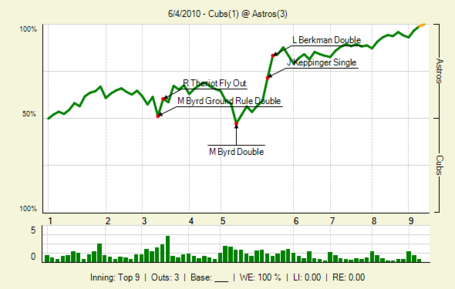