In seven innings, Wandy Rodriguez struck out six, walked one and gave up seven hits. He also allowed just one run. It was the third time this season he's finished the third innings and was his third-highest strikeout total in 2010. The only time he allowed this few runs this season was June 2, in a five-inning outing against Washington. The last time he pitched into the seventh and only gave up one run? September 9, 2009 against Atlanta, when he had an almost identical line as Wednesday afternoon, minus four hits.

This is the Wandy the Astros needed all season. The Brewers were able to hammer his curve early, but he was able to pitch through his problems and got great plays from his fielders. Michael Bourn made one of the best plays of 2010 when he leapt to catch a fly ball that could have been a home run in the second inning.

The other story of the game is Chris Johnson. The rookie third baseman has struggled with his fielding and plate discipline, but there's nothing wrong with his skill set once he makes contact. He was 4 for 4 with a double and two RBIs. It was his second four-hit game this season and those were two of the three four-hit games the Astros have had in 2010 (Michael Bourn had the third on Monday).

What has Johnson meant to this lineup? I'm not sure. He's hitting .333, which no other Astros hitter is close to getting. He's been good at contact hitting, with a little power, but hasn't shown much power. Does he fit better higher in the order, or do his strikeouts mean he's better off hitting fifth?

The rest of the order was pretty good too. Jason Castro drew another walk and caught another base runner. Geoff Blum had two hits and two walks. Jason Bourgeois walked in his pinch-hit appearance. Lance Berkman was 1 for 3 with two walks and a double. Wandy Rodriguez put down a successful squeeze bunt to put the Astros up 2-1.

All in all, it was a good day and a good series win. Houston is still sitting 17 games under .500, but have won two of the past three series. I'm just glad they're playing better than back in April and May. It would have been a long year had they not been able to win more than that.

Here's the WPA graph, courtesy of FanGraphs. Shows why I didn't feel good about this game until late, too. 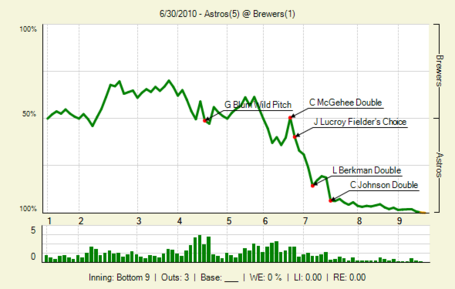