Share All sharing options for: With apologies to Brett Myers: Astros 5 - Brewers 7

David claims full responsibility for Carlos Lee's batting average, so I have to take full responsibility for Brett Myers' shelling tonight. I went out of my way to point out how Myers' career lows in the HR department made him an ideal trade candiate that could reap rewards for the Astros and let his new team deal with reversion to the mean. Then he went and gave up four home runs and raised his HR/9 .30 points in 6IP (.62 in the first 101.1 IP).

I suppose these are the perils of prodding around in your team's statistics. Brett, I am sorry. To the baseball gods: what do I need to sacrifice to you to fully repent?

Things weren't all bad for the hometown nine because Brett Myers did eat six innings and Gustavo Chacin's one and third allowed the Astros to only have to go to the pen twice. David also pointed out that Jason Castro recorded something in the box score that was entered as "BB." He also entered in 2B as well. Pedro Feliz also validated Brad Mills' decision to ride the hot hand and went yard.

Lance Berkman's multi-hit night added some late inning heroics on a double to center field that scored Michael Bourn who also had a multi-hit night and one of those "BB" things. With Lance standing on second and only one out left, Carlos Lee then drew another one of those "BB" to bring Hunter Pence to the plate as the go ahead run. All was for naught when Pence then grounded into a force out at second. 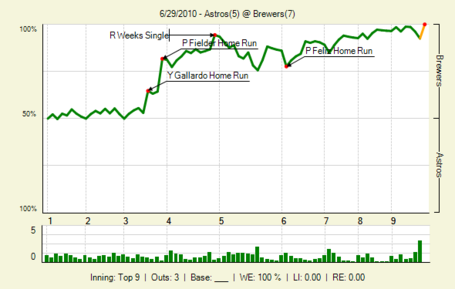