This game had something Astros games rarely have this year- an air of importance. With Bud Norris returning from the DL, his performance from here on out will be closely tied to the Astros future success. In the regard, tonight was somewhat of a mixed-bag, but one that has me feeling good. The pluses: 5:1 strikeout to walk ratio. That is only one plus, but for Norris, that's a huge plus. The minuses were the fact that his pitches got shelled, his fastball was pretty lifeless, and that it took him 97 pitches to get through 5IP. I'll take control, though.

What I'll also take is the offensive explosion that got Norris off the hook for his four runs surrendered. Multi-hit games from Pence, Lee, Bourn, and Pedro Feliz. Yes, you read the last player's name correctly. Further among the postitives from the Astros bats were the general plate approach that both Jason Castro and Chris Johnson took. Castro was patient as can be and Johnson seems to have already adjusted to whatever the advanced scouting reports have on him by fending of the inside pitch with excellent contact being made.

It should also be noted that in one inning Michael Bourn hit a home run and then Chris Johnson drew a walk. In the same inning. The baseball gods clearly decided to smile on the Astros this evening.

The Astros bullpen stepped up and held their own to allow for the following to play out: 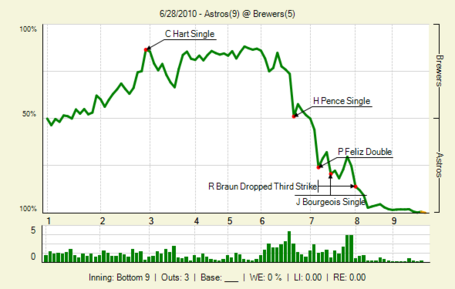 Brandon Lyon deserves tons of credit for K'ing Ryan Braun with runners at second and third bottom of the seventh to get the Astros out of a jam and then K'ing the side—swinging—in the bottom of the eighth. Four K's for four outs ain't bad.