During the game, Evan and I discussed whether we should just pre-write every game recap for the Silver Boot Series to save us time in the future. It would be fairly simple to just find and replace "Astros starter that gets lit up," "defender with sloppy fielding," and "reliever who didn't strand inherited runners." It would be embellished for later games in the series with "the Astros continued to struggle to score runs."

I know it's a generalization, but it doesn't feel like much of one.

At least interleague is over and we can put away the sting of a silly little month that should be meaningless if not non-existant in the standings/schedule. Unfortunately, Roy Oswalt didn't help his or the Astros trade market designs with his garish line of 4.2 IP, 8R, 7ER, 3K, 4BB. Bud Norris does make his return from the DL tomorrow. This will either spell further depression in our immediate future or offer some measure of relief. Here's to hoping it's the latter.

To say that this was not a fun game to watch is an understatement. One that can only be truly recapped through the majesty of WPA: 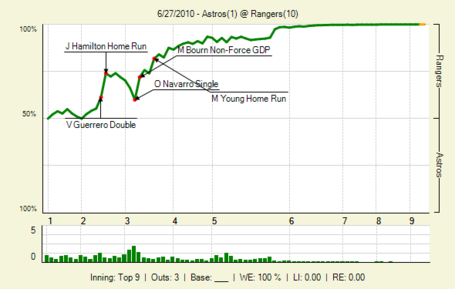