Rangers Use Big Inning to Knock Off Astros 7-2

Share All sharing options for: Rangers Use Big Inning to Knock Off Astros 7-2

I can't say that I was surprised that Josh Banks got hit around by the Rangers. After all, he's a guy who pitches to contact, doesn't get a lot of swing-throughs and the Rangers are one of the best hitting teams in the majors.

I was a little disappointed, though. With the victory, Texas wins the Silver Boot Trophy and the Lone Star Series for the fourth straight season. There are so many games between these two teams that end with us on the wrong side of a blowout, too. I don't like that at all.

Banks was pretty good for the first part of the game, only really getting into trouble when Jeff Keppinger booted a grounder in the second inning. His main problem came with his control. He walked four batters in four innings, though he pitched to one batter in the fifth. He also threw just 55.9 percent of his pitches for strikes and though he did get eight ground ball outs, he gave up far too many fly balls and line drives. For a ground ball pitcher to succeed, that ratio needs to be a lot higher.

On the plus side, it was nice to see Jeff Fulchino come out and have a nice outing. His two scoreless innings of work may not totally alleviate fears over a possible injury, but it was good to see him pitching effectively again. I can't say the same thing for the Round Rock Trio, who combined to go 2 for 11, with Jason Bourgeois picking up both of the hits. In fact, Bourgeois and Jason Michaels were the only two Astro hitters to have any luck against C.J. Wilson and company. Michaels briefly gave the Astros a lead with a 2-run home run in the top of the fourth inning. It was MIchaels' fourth home run of the season.

Jason Castro had an 0 for 4 game, but he was facing a tough, tough left-handed pitcher in WIlson. That means MIlls had a lot of confidence in Castro's ability to call a game and play defense, justifying starting him in place of Quintero. Castro and Johnson aren't going to light up the score board every game. These kind of no-shows will happen. Let's see what they do Sunday.

I guess we should probably gave at this WPA graph and think about what might have been. Too soon after Michaels' home run, the momentum swings back the Rangers' way. How many times have we heard that this season? It's getting tiresome... 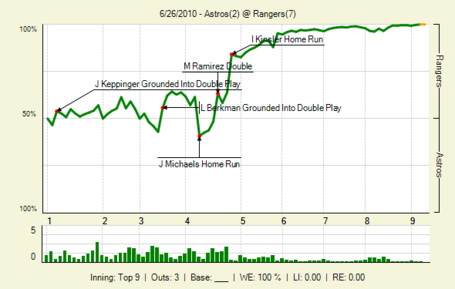