It certainly seems as though the additions of Chris Johnson, Jason Castro, and Jason Bourgeois have woken up the Astros offense.  It's a very early return, but a promising one: In the four games since the three players were called up, the Astros have scored an average of 5.25 runs per game.  The Astros have scored just under 3.5 over the course of the season, so if this keeps up, it will be a huge improvement.

Puzzlingly, Brad Mills started Geoff Blum at shortstop for the third straight game, pulling him in the late innings for Oswaldo Navarro.  His hitting performance was a happy result, but I'm not sold on him as the everyday shortstop for the next month and change.

Brian Moehler had a pretty typical start, for him: Five innings, three runs, battling through traffic the whole way.  He did allow three walks while striking out only three.  He continues to demonstrate that he still has a little bit left in the tank, and it's nice to get some value out of his $3M contract.

Chris Johnson made another error.  He's had errors in each of his three games since getting the call back up to the big league club.  To be fair, none of them were routine plays, but they were plays that should have been made.  It's a good thing Pedro Feliz hasn't been much better in the field lately, and that Johnson is hitting so well.

This win broke the Rangers' 11 game winning streak, and the Astros' three game losing streak against Texas.  Three consecutive wins feels like an embarrassment of riches for this Astros club, but for now, life is good. 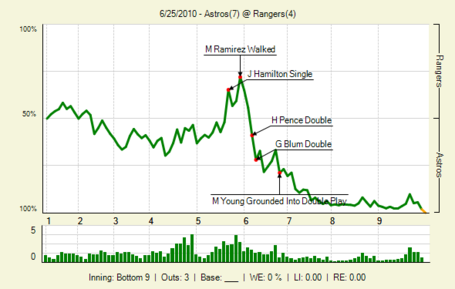