Share All sharing options for: CJ and Myers Lead Astros Past Giants 6-3

I bet Roy Oswalt gets pretty pissed when he sees games like this. It's not like he wouldn't kill for six runs in support of his starts. Myers, though, continues to be one of the best free agent signings this winter. While the risk coming off that injury last season was probably too great for some teams, the Rangers probably would prefer Myers to Rich Harden. And the Athletics might prefer him to Ben Sheets.

Still, Myers was impressive in his own right. He pitched 7 innings while allowing six hits and three runs (one earned) while striking out four and walking three. He also went 2 for 3 with a run scored and an RBI.

He got plenty of run support early and often. Carlos Lee hit an RBI-single in the first inning while Jeff Keppinger laced a double in the second with the bases loaded, driving in three runs. That pushed the score to 4-0.

Chris Johnson provided his own spark, going 2 for 4 in his second game after being recalled from Round Rock. He showed off some of the power the Astros hope to get from him at the hot corner when he doubled home Hunter Pence in the sixth inning to push the score to 6-2. Johnson also stole a base and scored a run on Myers' single.

Not to be outdone, Jason Castro collected his first professional walk, though he finished the night 0 for 3. He did hav a passed ball, but the rest of his defensive game appeared strong. As many of you noted, he'll most likely have the day off Thursday, but I expect the Astros to push Q back to a start ever five days. That leaves plenty of opportunity for Castro to make his mark.

All in all, it was a good win. Thursday, the Astros look to win their first series since they took three of four from Colorado. In the meantime...here's a pretty sweet WPA graph. 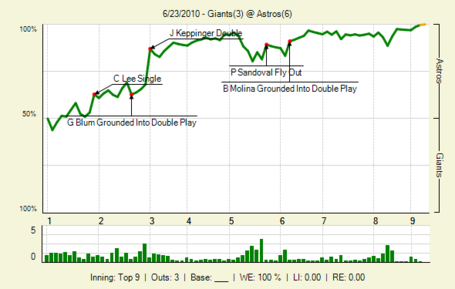