Share All sharing options for: Small Victories Not Enough as Astros Lose 3-1

It's been a hard season, but let's try to find the positives in another demoralizing loss.

First, Jason Castro not only threw out two base runners, but picked up his first career hit and scored his first career run. He finished 1 for 4 but acquitted himself well and showed the Astros enough to warrant continued optimism. Plus, he didn't seem to piss Roy off too much, which is always a good sign.

Second, Chris Johnson showed some patience at the plate as he also went 1 for 4. He averaged over five pitches per plate appearance, including an epic 9-pitch strikeout in the fourth inning against Lincecum. Since patience at the plate was one of the biggest question marks coming into the season for Johnson, it's a good thing to see.

Third, the Astros were able to hit Lincecum some and had some scoring chances. Bourn's double into the left center gap was a nice piece of hitting. The center fielder's 2 for 4 night is a good sign that he might be coming out of his hitting funk sometime soon.

But, that's pretty much it. More bad luck sunk the Astros. As clack pointed out in the game thread, the play of the game may have been a deflection off Lincecum's glove.

typical snake bit luck tonight. critical play was early in the game, after Astros scored first run, they had the bases loaded, and Berkman hit a hot shot up the middle, which normally drives in two runs…instead Lincecum barely flicked it with his glove, and the ball ricocheted toward Sanchez at 2d base who stepped on 2d and threw to 1st for easy GIDP.

It certainly swung the WPA graph back from over 75 percent back to around 60 percent. With Roy pitching lights out (7 IP, 6 H, 1 R, 5 K, 1 BB), the Astros really needed to score some runs. Unfortunately, that was not the case and Roy fell to 5-9. The Astros have scored 11 runs in those nine losses, which is a terrible parting present if and when he is traded.

As I said in the beginning, this game was about the little things. THe big thing, however, was a final score that was decidedly in favor of the Giants. 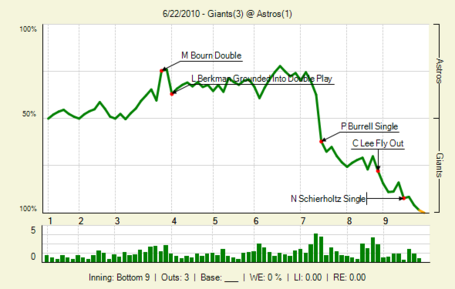