Share All sharing options for: Astros Booted By Rangers 9-3

Well, now. The Rangers sure did  a good job of recruiting Roy O, didn't they? By absolutely destroying Wandy's once-unhittable curve, they showed Roy what a good offensive team can do.

It seems like the Rangers do this all the time, though. At least one game in every series at MMP is a blowout. Of course, it didn't help that Scott Feldman (what kind of baseball name is that, anyways?) struck out Hunter Pence with runners on first and second in the first inning. It was a great chance to score runs, but the Astros got nothing out of it.

Compare that to the Rangers in the third inning. After the leadoff batter grounded out, the aforementioned Feldman doubled on a line drive. Then, the not-particularly-patient Elvis Andrus walked, followed by a walk to Ian Kinsler and another to Vladimir Guerrero, scoring the game's first run. Do you know how far a pitch has to be off the plate for Vlad to not swing? The guy hit a double on a ball that almost hit him in the chest. Twice this season.

Not to mention Justin Smoak hit a home run off Wesley Wright. That's the same Justin Smoak who has struggled in his big-league debut (though he smoked all the minor league pitching he saw...get it? smoked? See what I did there?) and who the Astros passed over for Jason Castro. Fitting that he went 2 for 5 with 4 RBIs, huh?

Don't get me wrong. Houston hitters DID get hits. Everyone but Michael Bourn and Humberto Quintero got at least one hit. The problem was the hits were not, dare I say, Clutch? There were 12 runners left on base by Astros hitters. That's not the best way to describe clutch situations, but it's a quick illustration as to how the Houston hitters could have been better.

So, we'll again end with the WPA graph, though there's not much to like here, especially since it dropped way, way down around that third inning. Stephen, Evan and I will be at the game Saturday, so we'll try very hard to reverse this funk. At the very least, Stephen has promised to run around in the outfield till he gets tased. Which should be fun. 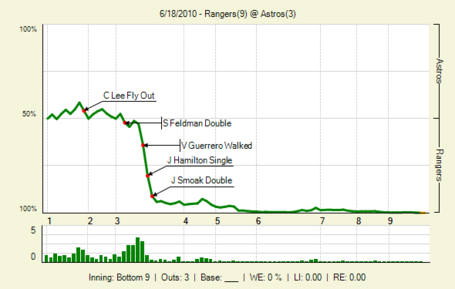