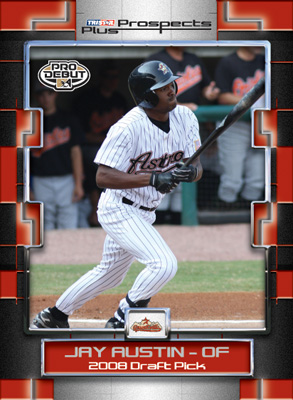 I've had a complicated relationship with Jay Austin over the last couple of seasons. We'll go out to dinner. He won't call the next day...Wait, you don't need to know about that. Let's just stick to baseball.

Austin has a lot of talent. Outside of some hot streaks and big months, Austin has not had the best start to his professional career. His best asset, however, has been his speed. In 2010, he was assigned to the hitter's paradise in Lancaster, California.

So, what has happened this season? How has Austin adjusted to the California League as one of its youngest players? Can we start to see a profile for what kind of big league player Austin may be?

Earlier this summer, Zachary Levine talked to Astros Director of Player Development RIcky Bennett about Austin. Bennett talked about Houston trying to change Austin's approach to take advantage of his speed. He talked about how Austin sometimes forgets and tries to hit for more power, instead of playing to his strengths as a leadoff hitter.

"He does have some power," said assistant general manager Ricky Bennett, who handles player development. "We have to remind him from time to time, ‘Hey, you've got to keep working on your bunting.' "

That's exactly what the hitting profile of Austin shows. He's hit a huge number of ground balls this season. In fact, 125 of his plate appearances have been grounders. As a left-handed hitter, about half of those have been pulled to the right side of the infield. That's also sort of unfortunate, as it limits his ability to leg out singles with his speed. That percentage was a lot more even earlier in the season, as Austin picked up ton of infield singles by slapping the ball to the left side of the infield. Of course, this isn't new for this season; in each of his last two seasons, Austin posted 60 percent ground ball rates.

Austin also has bunted in about 10 percent of his ground ball at-bats. The majority of those went to the pitcher, in the center of the field. That doesn't necessarily mean they all went straight towards the mound. If he's drag bunting up the first base line, the pitcher is the one most likely to field the ball, which illustrates another problem with doing detailed analysis based on minor league box scores. The 20-year old also hit 11 infield pop ups, with at least four of those coming on bunts. It appears he's still working on the fine art of the bunt. In fact, Bennett said as much back at the beginning of May:

We've really been focused on his plate discipline and his bunting," Bennett said. "That has to be a part of his game, (and it's) something we talked about (a lot) in spring training."

Those are obviously pretty good numbers, but we should probably touch on typing batted balls first. These numbers are based on stringer data, which can sometimes be unreliable. When we see Austin's line drive rate fall by about 10 percent from the past two seasons to 2010 and his fly ball rate goes up by a corresponding percentage, it stands to reason that maybe some of those fly ball singles may have been classified as line drives in year's past.

Still, Austin's profile in those two areas is a lot more positive than I expected. He's sprayed line drives to all fields, hitting four doubles to right and a triple to center field. He also picked up 23 hits on fly balls, including six home runs. Two of those were to the opposite field and Austin added three triples to center and right. He also had five singles to left field, showing quite a bit of balance in his approach.

Austin actually has a pretty equalized spray chart with a nearly equal distribution of hits to left and right. His hits to center are slightly lower than the other two numbers, but not enough to notice. When looking just at hit distribution, Austin has more hits going the opposite way than up the middle or to right. I like this approach. It shows Austin is willing to take what that pitcher is giving him and not try to pull every pitch.

Since the percentage of plate appearances aren't close to equal, that's not a good sign. The only positive indicator is that Austin's got a BABiP of .245 against lefties, so his numbers may rebound in future months. Still, these same numbers show up all throughout his minor league career.

Austin also doesn't appear to be affected much by the Clear Channel Field Effect. His batting average and on-base percentages are lower, but the slugging percentages are the same. While Austin has more doubles and triples at The Hangar, he's actually hit more home runs on the road. Austin does have a higher line drive percentage in home games and only 4.6 percent on the road. His infield fly to fly ball ratio is also much, much higher on the road, which suggests there is a certain amount of luck involved in his averages being suppressed on the road.

The last thing to trouble me about Austin is a downward trend in his plate discipline. In April, he had 10 walks and 13 strikeouts but those numbers have fallen/risen each of the past two months. Why he's walking less, I don't know. His strikeout rate rising is understandable. Austin has always had trouble making contact, but he needs to walk occasionally to keep the strikeouts from hurting as much.

What do all those numbers mean about Jay Austin? First of all, his speed jumps out immediately. He's been pretty efficient stealing bases, has more doubles and triples than his power suggests he might and seems to worry pitchers when he's walked. He's turning into the classic leadoff man in those respects, but one with a little more power potential than you'd expect. He also has a pronounced platoon split. Though he's only had a small sample size difference this season, the split continues throughout his minor league career. He's got over 600 plate appearances out of 800 against righthanders, though, so he may just not have enough experience against lefthanders to excel.

When his stats rose rapidly in May, it was not due to park factors in Lancaster. His home road splits aren't pronounced enough for that. However, it is clear that he's hitting for more power in the Cal League than in past seasons. That may be due to the lack of pitching talent there but probably because of all the good hitting environments. We also shouldn't be concerned about his dip in line drive percentage, since there are questions about the stringers' judgement on batted ball types in a new set of parks.

More and more, Austin profiles very similarly to Michael Bourn. While Bourn walked more at the lower levels of the minor leagues, Austin has more power. Bourn has him beat in stolen base percentage, but Austin is younger than Bourn was at this level. Bourn skipped High A ball completely, advancing to Double-A in his Age 22 season but suffered through his worst minor league campaign that year. Austin is young and in an advanced league, yet has shown no real dips in his averages from past seasons.

Looking back at Bourn's first two seasons in college (when the two were similar ages), Bourn still shows a talent for taking walks. He had a .431 on-base percentage in 213 at-bats his freshman season, but had a slugging percentage of just .330. In fact, Bourn posted on-base percentages higher than .400 in all three of his collegiate seasons. He was also successful on 90 of 119 stolen base attempts in three years at UH. Austin is 65 of 96 in his three pro seasons.

But, that all makes sense. When the Astros drafted Austin, it was with an eye to what he could be, not what he was. They're having to refine his talent, where Bourn got the benefit of aluminum bats to help him along. Bourn also probably had better plate discipline coming out of high school than Austin may ever develop. And that's not necessarily a bad thing. We're just trying to determine what kind of player Austin may be.

Austin is an intriguing prospect, but I'm not sure his ceiling is quite as high as was advertised during the draft. He is continually improving as a hitter and has a pretty advanced approach for a player his age. I like him as a Top 10 prospect in this system, but I'm leery of putting him too high. Until he makes an impact in the Texas League or higher, he profiles as a top-of-the-order hitter with a chance to play good defense.