This Is A Game Good Teams Win, Astros Fall 5-2

Share All sharing options for: This Is A Game Good Teams Win, Astros Fall 5-2

I hate freakin' Scott Podsednik! What in the world is a light-hitting outfielder who has no business being in the game any more doing beating the Astros? Oh yeah, because the Astros are not a good team.

Now, don't get me wrong. They have good players. Brett Myers is one, for instance, as is Hunter Pence. Jeff Keppinger isn't bad. But, for the most part, this team is bad. They have bad luck, they have bad talent and that adds up to bad results on the field.

And yet, they didn't. All because of two softly hit two-out singles in the bottom of the seventh inning. Then, oft-ridiculed Yuniesky Betancourt drove in a run with a grounder before Podsednik hit a three run home run, giving the Royals all the lead they'd need.

We can talk more about whether Brad Mills should have pulled Myers after the sixth, about why Cory Sullivan was up in a crucial situation when Jason Michaels was available or why the lineup was constructed like it was. But, I can't do it right now. I'm too demoralized by one of the least respected Astros nemeses beating them. I can understand Jim Edmonds terrorizing him at MMP. He's a good player. Mark Prior and Kerry Wood also owned Houston there for a while, but both were two of the best hitters in the game. The Podfather, as Baseball Reference refers to him, is a little off that mark.

So, look at this WAR chart and weep. Maybe I'll be over this disappointment by tomorrow. 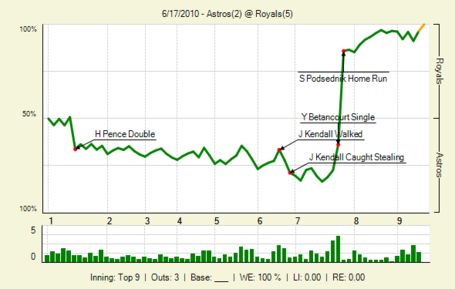