I have to credit Evan, who has been in hiding furiously studying for the bar...hoping against hope he hasn't wasted the last three years of his life, for calling the game tonight. After the first inning he said that the Royals were just going to paper cut us to death. And paper cut us to death they did.

What is absolutely incredible to me is if we approach the Astros fifth inning meltdown from a Run Expectancy perspective:

This is why baseball is a beautiful game, but it is also why it can crush your soul. From a base/out state that historically tells us there is only a probablity that .12 runs will score, seven runs were created. The rest of the game was just further depression: 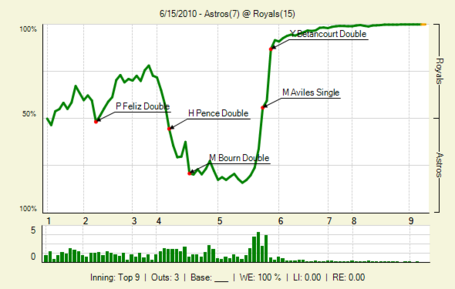