A Sweep in The Bronx: Astros Fall 9-5

Share All sharing options for: A Sweep in The Bronx: Astros Fall 9-5

Before we get started, notice TCB At the Ballpark is on. Go to this link and use the password (Crawfish) to get the discounted tickets.

What to talk about first?

This was the longest game of the season for the Astros. The time of 3 hours, 38 minutes barely nudged out the May 27 game against Milwaukee, though that Brewers game went extra innings. Part of the reason for that was the eight walks drawn by New York. Part of it was also the 4.5 pitches per batter faced that the Yankees batter had in this game.

The Astros only saw 3.5 pitches per batter faced. On the season, New York sees 3.92 pitches per plate appearance, which ties them for fourth in the league. Houston sees 3.71 pitches per plate appearance, which puts them second-to-last in the majors. That doesn't seem like a huge difference, but it's a nice illustration of why the Yankees lead the league in walks and on-base percentage and the Astros are last in each category.

We should probably talk about Jeff Fulchino. While he didn't give up a hit in his inning of work Sunday, he did walk two and struck out one. That lowered his ERA to 7.50, though ERA is an imperfect measure of a reliever. His xFIP is down to 3.85, in large part because he has struck out 24 in 24 innings on the season.

So why has he been so bad in so many games this season? He's giving up a very high home run rate, as over 22 percent of his fly balls are leaving the park. He's also walking just under 4 batters per 9 innings, which is very high for a reliever. He's given up runs in 10 of his 25 outings, including at least one run in his last five of his last seven appearances.

Brad Mills obviously still has faith in him, and we're dealing with an incredibly small sample size. But, the one area of this team that has some depth is reliever. If Fulchino isn't careful, he could easily lose his innings to Wilton Lopez.

Complaining about impatient hitters and a reliever misses some good things done by Houston, though. For instance, Tommy Manzella continued his hot streak with a two-run single and Kevin Cash hit a two-run home run. Since being put on the big league roster back in May, Cash has exactly 10 hits. Two of those are dingers, which is impressive considering he'd hit exactly 10 home runs in his major league career before this season.

As for Manzella, the only Astros hitter with a higher batting average in the past week is Humberto Quintero. Manzella also has a .395 wOBA over that stretch, which is good for third on the team. He's still striking out too much (28.2 percent) but has cut that rate in half over this latest stretch. His average is finally north of the Mendoza line but he's got  a ways to go before his season can be considered a success. These are encouraging signs, though, since Manzella proved himself to be a bit of a streaky hitter the past two seasons in Round Rock as well.

I'll leave you with this WPA graph and the knowledge that the Astros will be heading to greener pastures (Kansas City) starting Tuesday. 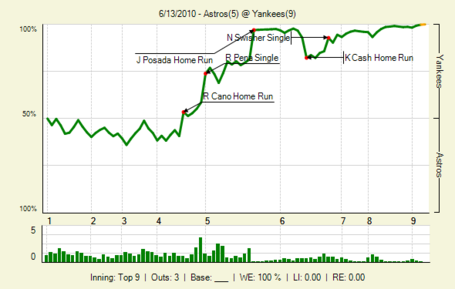