Wandy Rodriguez struggles to keep his head in the game when things are going poorly.  We've known this about him for a long time, and we thought last year maybe he'd shaken it, but in truth, perhaps things just didn't go poorly very often for him in 2009.

Two things stood out about his eight run, five inning performance today.  The first was a key play in the third inning when Wandy deflected what would otherwise have been an easy double play ball to clean up the inning.  It went for a hit instead.  The next batter, Jorge Posada, hit a grand slam.  That turned out to be the killing blow for the Astros.  The second thing which stood out was Wandy's season-high five walks on the day.  He was being squeezed by the homeplate umpire, but his control was also poor.

Jeff Fulchino pitched in relief, but chalked up two more runs to Wandy's record when Derek Jeter hit his second homerun of the game with two inherited runners on base.

Three runs by the Astros offense might have seemed like a small fortune on another day, with Hunter Pence and Carlos Lee both hitting solo shots, but today it was far too little to stand up against the Yankees' onslaught.  Jeff Keppinger also had three hits on the day, including a double, but none of them resulted in runs.

Some Astros fans have been calling for Wandy to be traded of late.  I don't think that's a very rational perspective.  We know Wandy is capable of being better than this.  Trading him now would be selling low, when ideally, you want to sell high.  Wandy will be under team control through 2011, so if he is eventually traded, it should probably be at a time when his value is higher.

In the meantime, we'll just have to hope he figures things out soon.  Some of today's mess was surely the result of New York's high-powered offense.  But not all of it, as Wandy has clearly taken a large step backward this season.

Tomorrow, the Astros will hope that Brian Moehler can do better.  God help us. 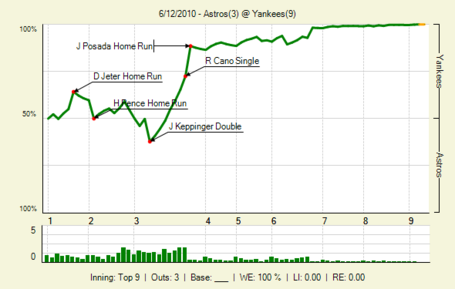