Share All sharing options for: Roy Oswalt gets back on track to let the bottom of the Astros order fell the Rockies 5-4

The part where Roy Oswalt pitches seven innings, strikes out nine, walks two, allowing two runs on a tidy nintey-six pitches isn't a shock. Sure, Oswalt's last two starts had damaged his quest for a ticket out of town, but it's Roy Oswalt, and Roy Oswalt pitches well. So congrats to Roy, who raised his stock on the trade market today.

The rest of the day get's a little strange, though. If you were just told that one guy went 3/4 with 2B, a HR, and 2RBIs, and then another batter that went 1/2 with 3RBIs, Humberto Quintero and Tommy Manzella, respectively, would not be the two players that jumped into your mind. Then if you were told that another Astro drew two walks and that allowed him two score two runs, Hunter Pence would not be the most likely of candidates. Sometimes truth is stranger than fiction and I that is why baseball is great because that's exactly what happened today.

I had to follow most of the game on my phone and I wondered if someone had written a virus for MLB At Bat just to screw with people's heads. But when I pulled up the box score at astros.com, I realized that the app was not deceiving me. Strange, strange, happenings to allow the Astros to take their third straight series.

Things got stranger as the Astros entered the eighth inning and Brandon Lyon was no where to be seen. Things got even stranger as the eighth inning got hairy and neither Brandon Lyon nor Matt Lindstrom were anywhere to be seen. Then as Casey Diagle got Jason Giambi to fly out to end the inning, Brandon Lyon was warming up in the bullpen and suddenly one run game.  Mills indicated that Lindstrom just needed a day off today to rest a stiff lower back, so hopefully that is all that is. 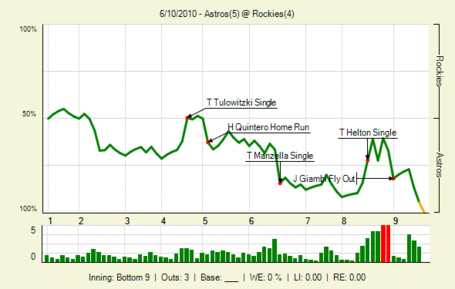