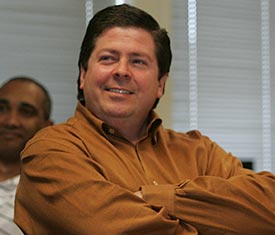 Spring 2003. Strolling around the clubhouse there must have been much for Jimy Williams to be thankful for. He had a lineup with veterans galore including Jeff Bagwell, Craig Biggio, Jeff Kent and Richard Hidalgo; some up and coming bats in Lance Berkman, Morgan Ensberg and Adam Everett; the top three in his bullpen were Billy Wagner, Octavio Dotel, and Brad Lidge; while the organisation had three bright starters; Roy Oswalt, Wade Miller and Carlos Hernandez.

Baseball Digest waxed lyrical about Oswalt and described him as a 'rare talent like Dwight Gooden who has simply taken off upon reaching the big leagues.' His 33-12 record and .733 winning percentage in his first 53 career starts would have thought to have been the record of a veteran arm, it went on to say, like that of 'Randy Johnson or Curt Schilling, Pedro Martinez or Greg Maddux,' high praise considering the group had won 12 combined Cy-Youngs up to that point.

Hernandez would take no part in that season, and has yet to make a major league start since 2004. Constant shoulder problems stopped what looked to be a promising career. He is now in the Rays system, hoping to claw his way back to the majors after six years out. Wade Miller had to have season ending rotator cuff surgery in 2004, spent short spells in Boston and Chicago but never fully recovered. And then that leaves Oswalt.

If they had stayed healthy, they might have been one of the most dominant trios in the game; a new Maddux, Smoltz and Glavine for the 21st century. Instead Astros fans had to endure unimaginable levels of angst every time Tim Redding or Brandon Duckworth took the mound, until they were finally 'disposed' of.

These developments should have caused the Astros to slide, deprived of their most promising young arms, but these problems were camouflaged by the arrivals of Roger Clemens and Andy Pettitte. So Hunsicker departed looking like a genius, while Purpura was left at the helm of a ship that was slowly but inexorably sinking, even if nobody noticed at the time.

You only have to look at the dearth of pitching talent that has come up through the Astros' system to see that in the last few years of Huniscker's tenure, all the arms that they drafted failed to make an impact at major league level. This includes Fernando Nieve, Jason Hirsh, Matt Albers, Troy Patton, Taylor Buchholz, Juan Gutierrez and Redding. Meanwhile the acquisitions of Pete Munro, Duckworth and Brandon Backe failed to plug the holes left by these failings.

This meant that Purpura and Wade had to look to the free agency market for starting pitching, and led to the signing of Woody Williams, Shawn Chacon, Mike Hampton, Russ Ortiz and Brian Moehler (and lest we forget the truly horrific trade for Jason Jennings). These were burnt out veterans with very little to offer a ballclub. In 2007, the 49 starts made by Jennings and Williams cost the Astros $11.5m. At least Hampton, Ortiz and Moehler who had 63 starts between them in 2009 only cost $5.05m. But what else could Wade or Purpura do? They were trapped, as the talent that had been drafted under Hunsicker showed itself to be worthless.

As has been pointed out in this excellent article, you can't make much of a comparison to what Huniscker and Wade inherited respectively when they became GMs. The former inherited a side with a strong nucleus, and added some key parts in drafted players such as Lance Berkman, Oswalt and Brad Lidge, and meant that he had the organisational depth to trade veterans like Billy Wagner when he thought he could get good value for them. Obviously the Wagner trade had much to do with the closer's barbed comments about owner Drayton McLane, but in the grand-scheme of things it made good sense. Too bad the three players Houston received in the deal, Duckworth, Buchholz and Ezequiel Astacio did not work out. Hunsicker would have seen Wandy Rodriguez's 2009 season and thought, can he really keep that up? When a players' value is high, sometimes it makes sense to move them on, as long as you have some organisational depth behind them. Ed Wade did not have that, and I doubt McLane would have been thrilled to see one of the Astros' few pitching talents being moved. This spring they struggled to fill five spots as it was.

Wade meanwhile, had to gut a team full of mediocre players, many of whom were killing the team with their performances; Chris Burke, Morgan Ensberg, Jason Lane, Adam Everett, Brad Ausmus. In 1,424 plate appearances, those five had a combined WAR of -1.7. He traded away what talent we had left, and tried his best to plug numerous holes within the roster, and somehow we fluked a 86-75 record the next year.

Finally, with Paulino's last five starts we are seeing a pitcher finally come through the minor leagues and succeed in the bigs (even though Paulino was taken as an amateur free agent in 2001). But the litmus test is whether he can do it for a sustained amount of time. Taylor Buchholz showed flashes, but never really amounted to anything. Nor did Hirsh, who terrorised minor leaguers almost as much as Strasburg has this year, but failed when he called up. True, Purpura compounded the problem by repeating many of his predecessors' mistakes, but before you criticise Ed Wade for the mess the organisation finds itself in (and I am not absolving him of all the blame, only some of it), first go and look at Hunsicker's last five drafts and ask yourself one question. If you exclude Chad Qualls and Hunter Pence, who are the exceptions that prove the rule, have any of these names made us a better ballclub?