Why would the Astros ever make it easy on us? Nationals 7 - Astros 8

Share All sharing options for: Why would the Astros ever make it easy on us? Nationals 7 - Astros 8

If someone would have given you a run down of tonight's game at lunch today, but only told you what happend through the first eight and half innings you would have heard this:

Brett Myers will strike out ten, walk three, but give up four runs in seven innings thanks to two Lance Berkman errors and host of other defensive miscues. The Astros will somehow scrap together six runs to offset this, though. Brandon Lyon will struggle in the top of the eighth and allow the Nationals to bring it within one run. Then Matt Lindstrom will proceed to immediately load the bases and give up two runs while recording only one out. Wilton Lopez will be brought in to mop it up and he will. The catch is that going into the bottom of the ninth Pedro Feliz, Kevin Cash, and Michael Bourn are due up.

I'll be honest and say that I wouldn't have turned on my TV tonight. I just would have assumed we would be recording another tally in the Astros loss column.

Such is the state of this team recently. Never has the metaphor of sinking ship seemed to apt to me as it did up until Lance Berkman drove in the winning two runs with two outs in the bottom of the ninth (thanks to the table setting efforts of Pedro Feliz...who ROE'd...Corey Sullivan with a pitch-hit 2B, and Michael Bourn's IBB). When the starting pitching pitches well, the Astros can't hit. When the offense is humming a long and the starters are keeping us in it, the relief falters. If the starting pitching is doing well and the offense has given it a lead to work with, the defense will find away to botch the game. Or, as was the case this evening, options two and three were correct. Plugging one leak seems to build pressure at another point, which then springs another leak and the Astros are just not a group of baseball players with the ability to plug all these leaks.

By the way, the correct answer choices render Win Expectancy graph like the this one: 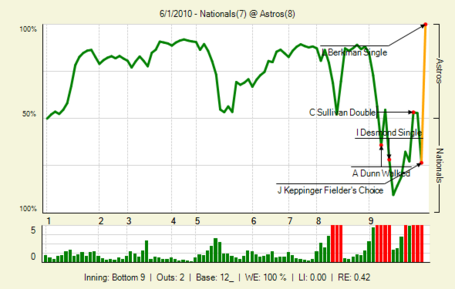 I am grateful to see the ridiculous 73.4% swing there at the end. However, given that inning started with a 89.9% chance of the Astros losing this game, more often then not the Astros will not be able to over come such fantastic failures throughout the season. I couldn't find it in myself to celebrate beyond the first thirty seconds of reading "In play, run(s)" because it was a sloppy win that needed not be sloppy.