Let's change this up. Instead of seeing what Roy Oswalt was throwing before he was thrown out of the game, how about looking at what Gustavo Chacin brought to the table?

Chacin basically thrived off two pitches here. His four-seam fastball was his favorite pitch, and it's pretty good. It has decent vertical break, but at that 89 MPH speed, it can be very hittable. He's also got great tailing action in on the hands of lefties with the pitch. Might be a problem working against righthanders if his location isn't great. With that pitch, he needs to live on the outside of the plate against righties. His slider is also a decent pitch, though it doesn't have a ton of vertical drop to it. Clocking in 4 miles per hour slower than his fastball, it probably works pretty well as a change of pace pitch, especially if he can disguise it well. The slider bites away from lefties, which could explain why that was the pitch he got the swing-through on.

As you can see, his velocity was all over the board in this game. He hit 95 with his four-seamer and with what they're calling a two-seamer, even though it profiles as a four-seamer that just happened to break the opposite horizontal direction. Let's look at his velocity throughout his three innings of work. 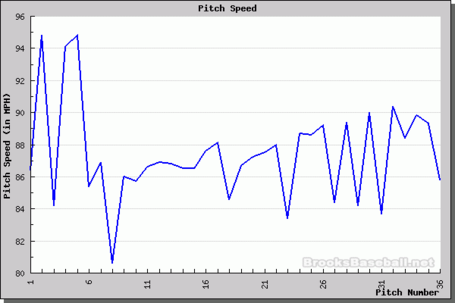 If that's not a speed chart of a guy who's been jerked from the rotation to the bullpen and back again, I'm a monkey's uncle. Chacin has obviously gotten his arm in shape for short outings, as he hit 94-95 in his first six pitches. Then, his velocity dropped down into the 88-90 range and he was less effective. When we hear that guys need to get stretched out, this might be a graphic illustration as to why that is. Chacin probably won't hit 94 in his starts, but I could see him sitting around 92 as a reliever.  Still, there is another chart that depicts why the velocity drop leads to trouble. 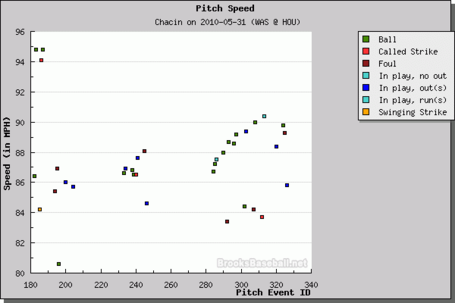 This shows the velocity of Chacin's pitches graphed against the pitch outcome. See how many of those "In play, no out" or "In play, run(s)" get lumped into that group of slower fastballs? Chacin probably stayed in a bit too long, but if he can keep his velocity elevated, could be a solid pitcher for the bullpen.

Comment of the Day and Leaderboard: I know, I know, I've been slacking on these leaderboards. I'll get you the May days that I missed on Wednesday. For now, enjoy this:

Awful is when you go to kiss your grandma….and she slips you the tounge…..This is more like HORRIFIC!!!!!!

A close second-place finish for titansfan4ever came with this gem:

Look, my son throws 87…and he’s only 16…I guarantee ya’ll, if he pitches and I catch….Joe in Birmingham can play 1st…entropic soul can play 2nd….ol pete can play 3rd….timmy_ can play short….clack can play LF….David Coleman can play center….and OremLK can play right…and I guarantee you we could do better than 4-14!!!

Put me in center and I guarantee I won't make anyone forget about Michael Bourn. At least the fans might get a few laughs after I awkwardly stumble up Tal's Hill and run into the flagpole...Still, I'll have to run this idea by Ed Wade next time I see him.

Oswalt and Berkman trade scenarios: Brad O'Neill over at Deep Leagues has once again done his thing on the Astros. This time, he's talking about trade scenarios for each of Houston's big names. What do you think about the returns? I'd be happy with most of those trades for Oswalt and Berkman. While getting Hellickson and Brignac in a deal would make my season, I'm not sure that I'd like to give away Lindstrom in the process. Similarly, the deal with the Reds for Oswalt is based on Homer Bailey turning into a big-league pitcher, and I'm not convinced that can happen yet.

Deep Leagues also posted an updated mock draft. Whereas Frankie Piliere's latest mock was the dream scenario for the Astros (Cox at No. 8, Josh Sale at No. 19), this one could be the nightmare scenario, with both Cox and Sale gone before the No. 8 pick. I think Choice would be a good...choice...at No. 8 if the other options were gone, but I'm not convinced this system needs another outfielder.

I link...you decide: Here's an open letter to Drayton McLane from the guys over at Kategorie H. Despite the non-traditional route to fandom that the author took, can you relate to what he's feeling? Especially after this weekend's atrocities? I'm not sure he's even ready to go through with selling all his Astros gear, but he brings up a good point.

Where is your line as a fan? What would McLane have to do to lose your support? Move the team? Fire Ed Wade? Host a Twilight watching party in the outfield?

As for me, I grew up an Astros fan and will probably stay one until I die. Sure, I may flirt with the Rays or the Indians, but in the end, I only have eyes for one team. Even if it makes me punch a couch cushion over and over again every two or three days.