Inevitably, we should talk about the pitching. Let's get to it.

Brett Myers - In his highly anticipated Astros debut, Myers promptly gave up more hits than at any time previously in his career. Not the start we were hoping for, I'm sure. What was he throwing?

First thing that jumps out at me? Myers threw a TON of pitches. Not just numbers-wise, but in his pitch choice. He also got a little too much of the strike zone. Which may explain why he gave up so many hits. None of his pitches were thrown for strikes less than 70 percent of the time. That's fine if he's got amazing stuff.

Here's the paradox with Myers, though. His 'stuff' seemed great on one hand. He got seven whiffs out of 100 pitches, which is better than either Wandy or Roy did. He also got whiffs on all four of his pitches, equally impressive. That he did this with two fastballs that averaged just below 90 MPH is just weird. Look at the movement on those fastballs. His four-seamer didn't have a ton of movement, but his sinker had more horizontal break than his slider. His slider and curve broke away from right-handed batters, but his sinker broke in on the hands of the batters. In fact, with that kind of horizontal movement on the sinker, it was almost like a screwball.

Going further with this, look at the new column that Brooks Baseball has this season. "Nibbleness" shows how many inches a pitch was from the edges of a normalized strike zone. The lower the number, the more the pitcher tried to nibble around the edges. Myers four-seamer had the lowest number I've seen in three days. So, his fastball didn't have a ton of movement, it was slow AND he tried to be too fine with it? No wonder he got hammered.

To show you visually how Myers used the strike zone, here's a handy chart: 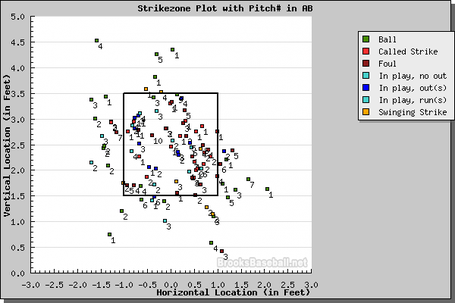 Most of his pitches were clustered low and way to right handers. He did miss on some pitches, but most of them fell into that corner of the strike zone. Apparently, it was also right where the Giants hitters wanted it. It's hard to see, but there are plenty of those blue 'In play, no out' dots in that section.

So, Myers needs to work on some specific things. Who knows whether his 'stuff' will rebound once his spring injury is completely heal and he's had some more regular season starts under his belt. Right now? He's a long way from being that No. 3 starter we were hoping for.

Sammy Gervacio - Interestingly enough, Gervacio threw his fastest pitch when Mills says he hurt his arm. Was he reaching back and overthrowing? Who knows? I do know that he used an even mix of sliders and two-seamers, which was different than his first appearance, FWIW.

Chris Sampson -Wow, this was not the game for radar guns. Sampson didn't break 90 MPH with any of his 15 pitches. He also didn't throw many strikes and got zero whiffs. Not his best outing of the season, by any means. Let's just give him a mulligan.

Jeff Fulchino -The big righty was hitting 93-95 with his fastball, but couldn't throw it for strikes very well. On his 11 heaters, he only got 6 over the plate and only one swing-through. His four-seamer also broke about the same amount back in on right-handed hitters that Myers' two-seamer did. Two of the three hits off Fulchino also came on first pitch fastballs and were left out over the plate too much. Probably should have 'nibbled' a little more.

Tim Byrdak -When your most effective pitcher may have been Tim Byrdak, you're probably having a bad day. Seriously, though, it was nice to see a competent outing from the lefty. He managed to work both sides of the strike zone to get outs, but threw his slider much better than his fastball. In fact, he only threw one strike out of six fastballs, but nailed all six sliders for strikes, including two swing-throughs. I thought it was easier to throw a fastball for a strike?

Brian Moehler - Fitting that Moehler's first game should be this disaster. For as much hand-wringing as we did this offseason about Wade's decision to keep Moehler around, Moehler had an uneven outing. He had trouble throwing strikes. One of the few pitches that did find the zone was hit for a home run. None of his seven pitches topped 90 MPH. Still, the fact that Moehler got two outs when he was this bad has to be a good sign, right? (Now, I'm just spouting gibberish. Let's get on with the rest of this story).

The Rule of Three Rookies: One of the things Joe In Birmingham has been espousing through the first three games is the Astros desire not to play three rookies at the same time. Well, this handy post from the Baseball Reference blog does a good job of visualizing that theory.

In the last 20 years, three or more rookies have debuted in the same game five times. Twice, the Detroit Tigers did it, for teams that would go on to lose 100 games. Of course, this also is talking about players debuting at the same time. I still think it's relevant here. There's obviously some sort of rule in baseball about playing that many rookies together. Whether it's an unwritten rule, a stigma kind of thing or what, I'm not sure. I do know that it looks to be pretty rare, so we probably won't see much of Towles, Johnson and Manzella at the same time.

(This does actually make sense. That'd be over one-third of the Astros offense. If any of those guys struggled, it'd kill an offense quickly. So, the theory does seem to have some merit, but I'd like to see more evidence before passing final judgement).

Comment of the Day and Leaderboard: Though most of the posts were negative, we have a new leader for the day in clack. Also, Danteslion made a nice showing in his first game thread action this season. Keep up the good work, everyone.

The day's best comment didn't happen in the game thread. Oh, there were plenty of good ones to choose from there, but I'm going outside the thread for one day only, because of this gem from OremLK.

My wife teaches preschool. Here is a text she just sent me:

This has been the worst day. Everyone has gotten hurt and Stella peed her pants on the playground.

And here’s what I sent back:

Sounds like the last couple weeks for the Astros. Except they probably didn’t wet themselves.

Couldn't have summed up how I feel about the Astros right now any better. Kudos to you.

Retro Day: You may not have heard, but this Saturday, the Astros are throwing a Retro Day. The Astros and Phillies will both be wearing replica jerseys from the Colt .45 days and the ground crew and ushers will all be wearing throwback costumes as well.

Sounds like a good time, right? Well, they'll also be giving out replica Colt .45 jerseys to the first 10,000 fans. I already have my tickets for the game (though I'm sitting up in the outfield deck). Anyone else going to the game?

FanGraphs partnership: Lastly, on a short day for the notes section, I'd like to let you know about a new partnership SBNation entered into with FanGraphs. Our content will now be featured on their player and team pages, as well as select stories on their front page. This is obviously a great opportunity to work with a great site that we all use quite a bit. If you have a chance, wander on over there and check out the new setup. Also, look for new ways in which the partnership will benefit us in the future (widgets tying in their stats, etc.).