This is already old and we're only two games into the schedule. Can Lance Berkman bring a couple more hitters with him off the DL? This lineup needs a ton.

Let's get to the pitchers first. I meant to mention in yesterday's story, but I'm actually using a different site for these Pitch F/X breakdowns. The guys over at Baseball by Brooks have a great database that tied directly into the MLB feed, so it updates right after the games are over. It's mainly a game-by-game rundown, which isn't all that useful when looking for trends over a season, but it's wonderful for these recaps.

Wandy Rodriguez - This was a strange night for Wandy. He got through the first inning unscathed, produced a ton of ground balls, but did get hit around pretty good in the sixth. Yes, he used four pitches. But not really. Let's look at his breakdown:

All but eight of his pitches were curveballs or four-seamers. And he only got five swing-throughs all night. That's not a very good night. The one big thing that jumped out at me as well was his strike percentage on his four-seamer. For a pitch he threw 39 times, 55 percent strikes isn't very good. You can't even claim that he was trying to miss intentionally to get batters to chase, because he didn't get one whiff all night with the four-seamer. Compare that number on the fastball strikes to the profile we did on him a couple weeks ago. He threw the fastball for strikes over 66 percent of the time in 2009. This must've just been an off night.

His velocity looked fine. After all, Wandy will never be mistaken for a hard thrower. However, the graph of his velocity over the course of the game is troubling. 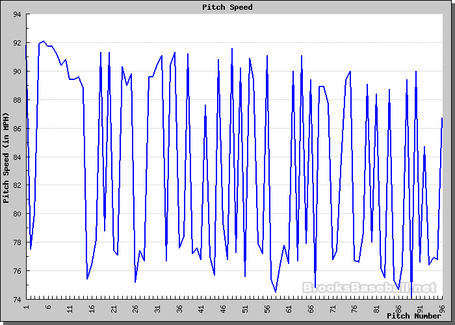 Notice how the peaks on the graph trail off towards the end? Someone in the game thread mentioned his four-seamer was clocked at 85 MPH at one point late in the game. This certainly supports that comment, as he definitely tired as the game progressed. I can only wonder why Mills didn't pull him sooner. With his wildness and flagging velocity, do you think Mills pulled the opposite of last night and waited too long to pull him? Will it just drive us crazy to analyze the manager this early into his process? Yes, yes it will.

Jeff Fulchino - Last year's team ROY did well in his first 2010 outing. His fastball averaged 95 MPH and he used that the most, but also mixed in his changeup and his slider. He only needed 10 pitches to get through his inning, so there's not a lot of data here. What is interesting is that he got swing-throughs on both the offspeed pitches.

Brandon Lyon - Was anyone else relieved that we got through this Lyon outing without an injury? I think I expect impending doom more for him than I do for Matsui now. What's that say about Wade's prized offseason addition?

The numbers tell an okay story. Lyon threw his slider six times, his fastball four and his curve once. His fastball averaged just under 92 MPH and his slider clocked in at almost 89 MPH. Those pitches are probably hard to differentiate when he throws them like that. No swing throughs, but Lyon did throw a large number of strikes.

We only have 11 pitches to talk about here, but what did you think? In a non-pressure situation, Lyon looked about as good as you could hope for, right? Any other impressions of his Astros debut?

Matt Lindstrom - In contrast, Lindstrom did look the part of lockdown closer. His four-seamer hovered around 96 while his two-seamer ran up there over 97 MPH. That's a pretty nasty combination, no? The curve clocked in at 82, which isn't Roy Oswalt-type disparity, but it's enough to make Lindstrom effective.

He didn't get any whiffs on his stuff, but only needed nine pitches to get through his inning. It was a very efficient outing and one we might appreciate after living with Billy Wagner and Brad Lidge for all those years. it seemed like those two guys started with a runner on second every inning.

Lindstrom was still a little wild. While he threw a good percentage of strikes, when he missed, he missed big time. I liked what I saw here. Let's get him into a real save situation tomorrow, yes?

Mills Watch, Day Two: I wonder if this will be the back end of the bullpen we normally see. Fulchino in the seventh, Lyon in the eighth, Lindstrom in the ninth? Makes for a nice hierarchy, huh? We're still way too early in the season to start to detect Mills' patterns yet, but I find it interesting that he's used the six guys in this way the past two games. Could it be a matter of preference?

With much of his bench already in the game, Mills only used one pinch hitter: Geoff Blum. That seems a much more likely scenario for the rest of the season, as Blummer won't always be the starter at first (we hope) and Mills seems to have built up a good comfort level with him early.

Incidentally, I Twittered a question at Alyson Footer on Tuesday about Chris Johnson being used as a pinch hitter. The reason I asked is because Mills said he feels comfortable using Johnson against righthanders as well as lefties and this is not a straight platoon. She confirmed that Mills will use Johnson as a pinch hitter while he's on the roster. It may be an insignificant point, but I'll be interested to see if he does use him and in what situations.

Double up: The Astros have now turned five double plays this season, including another three on Tuesday. Granted, the Giants are a slooow team. One of their best players is nicknamed, 'Kung Fu Panda' for Pete's sake. They will certainly not win any foot races this season.

In spite of that, I think the Astros could be a very good team defensively this season. Even with Keppinger in at second, the Astros were able to make some stellar plays. In one of the middle innings, Johnson started a double play that Keppinger made happen with an outstanding relay to first. Double plays aren't the best measure of defensive prowess. After all, the Astros were tied for third in the NL last season with 161 double plays and were regarded as a pretty bad defensive team on the infield. The addition of Feliz and Manzella hasn't had time to settle in just yet, but I'll be interested to see if that DP number goes up or down this season

Johnson debuts: It was not a good night at the plate for Young Master Johnson. The 25-year old was 0-for-4 with one strikeout. He batted three times against Zito with no results before striking out against the only righthander he faced. I'm actually okay with this line, since I fully expect him to strike out much more than this. Let's consider this an offensive draw.

Defensively, Johnson started one double play and make a couple nifty plays in the field to get outs. However, most of the balls were hit right at him, so he didn't really have to move that much to make plays. Is that a sign of Johnson's maturity at the position or a credit to the excellent early job new fielding coach Bobby Meachem seems to be doin

Comment of the Day & Leaderboard: And we have a winner going away. Z-Dub had over 25 percent of the comments in Tuesday's game thread and posted a WARC (Wins Above Replacement Commenter) of 7.2. That's Pujolsian. So, consider the gauntlet to be thrown, rest of you commenters out there. Show up heavy or don't show up at all...(actually, scratch that. Show up all you want, or as little as you want. We need the traffic.)

Lots of choices for comment of the day too. My favorite, though?

This is entirely subjective, right? But any time you can work a movie quote, a geeky reference or some sort of witticism (maybe even a literary reference), your chances of making this section skyrocket. I'm pretty easy to please and this Major League reference did just that. Now, excuse me while I go use a snake to open my locker..

Minor leaguer retires: J.B. MacDonald, a pitcher the Astros selected in the 18th round of the 2009 draft, announced his retirement on Tuesday. Thanks to Astros County for the heads-up.

This was too weird a situation to wait for Friday's Minor Thoughts. Basically, MacDonald has a shoulder injury, but is claiming he just doesn't have a passion for the game any more and that it's not due to the injury. Now, I'm not doubting the guy here, but he was injured in his last season at BC and the Astros picked him as a projection guy, not as a college starter who was already polished.

What's weird is there have been a rash of early retirements lately. First, Grant Desme retires this winter to join the priesthood. Then, that Royals pitching prospect retired in the middle of spring training. Now, MacDonald retires after getting assigned to Low A Lexington. MacDonald's situation also worries me some, since he appears to have an interest in sports journalism as a career. I don't really need more competition, J.B. Can't you just go back to playing baseball and NOT trying to compete with me? Thanks

Ensberg interview: Last item of the day: Razzball has an excellent, extended interview with Morgan Ensberg live. Some great, Astros-related stuff in there, though I'll admit I haven't had a chance to read through all of it yet. Hopefully, we'll get Ensberg on here for an interview in the near future. Do you guys have any questions for the former All-Star third baseman?