I'm always coming up with crazy ideas, I know. This one may take and it may not. I'm going to throw it at the wall (you readers) and see if it sticks. Evan is going to handle many of the game recaps this season (and a very big thanks to him for that). What I'm thinking about with this story each day is part extended recap, part link dump and part open thread for discussion. We can talk about the upcoming game some days, what happened the night before on others or something like the draft when it gets closer to time. It's going to be a notes column like you've never seen.

One thing we'll do in every story, though, is look at the pitchers from the night before through Pitch F/X data. Over at Brooks Baseball, they have a tool that lets you pull game-by-game data. It's pretty granular at that level, so we won't be able to draw lasting conclusions from it, but I think there is some great possibility to see how guys do. Let me show you what I mean:

Roy Oswalt - The starter went six innings while giving up three earned runs, two walks and striking out two. He threw 85 pitches, including 32 two-seam fastballs, 24 four-seam fastballs, 14 sliders, 12 curveballs and three changeups. As you'll see, some of those sinkers were probably four-seamers and vice versa. But, let's look at the data as-is.

Here's a chart of Roy's speed, selection and percent strikes:

He showed pretty good velocity on the fastball, getting a couple up to 95 at best. His slider was also coming in at the speed of a Greg Maddux fastball and his curve was veery slow. Look at that for a second. His curve was 20 MPH slower than either of his fastballs. Is it any wonder that Kung Fu Panda couldn't hit that hanging curve solidly in the first inning?

The other thing to note here were the strike percentages. His slider and two-seamer gave him trouble. He just couldn't get enough strikes on those pitches, though that could have been by design. It's still somewhat of a departure from the Roy of old, who would go after a hitter no matter what was going on in the game. On the positive side, Roy's four-seamer got four swings and misses, the most of any pitch this game. 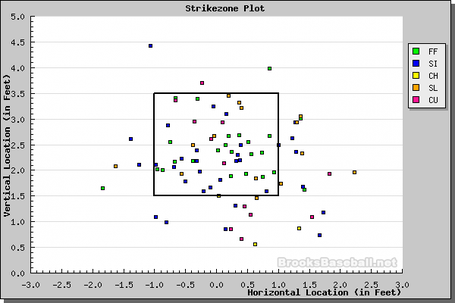 It's hard to see too much on this small chart, I know. But notice how all his curveballs were right down the middle? He elevates them or keeps them down in the zone, but didn't throw the curve on either side of the plate. Just an interesting sidenote, I guess. Anything else stand out about this start?

The last thing we'll look at with Roy is a graph of his velocity over the game. 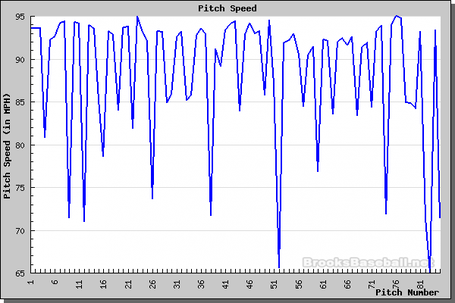 To me, this says that Oswalt wasn't being bothered by his back, nor was he laboring when Mills took him out. He hit 95 on the radar gun around his 75th pitch. That's pretty good. The other thing this graph shows is just how severe that change in speeds can be. Roy stays mostly in that 85-95 range, but when he does break out that yakker, he can really make a hitter look bad.

As for the other guys?

Chris Sampson - Though he didn't hit 90 on any of his pitches, Sampson did throw five curveballs, the most of any of his pitches. He also only used one changeup, which was reportedly the pitch that turned around his 2009 season after Roy Corcoran taught it to him in Round Rock. Sampson threw a lot of strikes but didn't get one swing-through (though he did have very few pitches thrown). it's still a pretty positive return for injury at the end of 2009.

Tim Byrdak - Could I be more down on the lefty from Rice? Probably not. Nothing stood out too much in his Pitch F/X data. He threw a bunch of strikes, but probably got too much of the plate with many of those pitches.

Sammy Gervacio - Surprise, surprise. Gervacio's most used pitch? The slider. He threw five of them and got two whiffs. That's a pretty good percentage, no? His one fastball clocked in at 92, but since he only needed 11 pitches to work through the ninth inning, we don't have a ton of data. His slider averaged 86 miles an hour with a max speed of 86.5. That's pretty consistent. Unlike Byrdak, Gervacio managed to hug the sides of the strike zone with all but one of his pitches. That slider painted the outside of the plate three times and twice got Gervacio a strikeout. It was a good first outing, indeed.

Mills Watch, Day One: Well, it's only one game, but we finally have something meaningful to discuss about Brad Mills. For instance, anyone else think it was odd that he used his only left-handed bat off the bench to lead off the bottom of the sixth? Sullivan struck out against Lincecum, but is this an indicator of Mills' preference or a desire not to throw a guy like Michaels out there to start the frame?

Speaking of Michaels, he was the third bat off the bench, entering the game in the ninth inning against closer Brian Wilson. So, Mills thought Kepp and Sullivan were better bets to pick up hits before Michaels? And is there a reason why he didn't try to get Johnson in the game in the ninth inning, to give the Astros a little more power in the lineup?

As for the pitchers, his decision to pull Oswalt couldn't be second-guessed too much. Bringing in Byrdak? Yeah, I'll second guess that. At the time, the Astros were still in grand-slam reach. Byrdak gave up one of the few extra base hits by the Giants on that home run to right field. The lefty didn't have a great spring and didn't look that great in this game. Let's hope Mills used him more situationally this time instead of as a preference thing.

Rookie debuts: Both Tommy Manzella and J.R. Towles got hits in their first Opening Day starts. Manzella looked bad a couple of times against Lincecum, but his single up the middle was scalded and he made a very nice play going first to third on Matsui's single. Plus, Manzella showed decent range at short and made two strong relay throws on the double plays. He gets a solid B grade.

As for Towles? He didn't get much chance to show his defensive acumen, as the Giants don't have many speedsters on the basepaths. He did, however, have a good day at the plate. Sure, he only got the one hit. His double in the ninth inning did drive in a run, but more importantly, Towles hit the ball well in all three plate appearances. He was a fingertip away from another double in his first at-bat, when John Bowker ran a ball down in the deep right field corner. I'd bump his grade up to a B-plus.

The strongest performance of the night had to be from Sammy Gervacio. Slingin' Sammy struck out two on a steady diet of sliders off the plate and had the entire Giants dugout cracking up with laughter at his delivery. Granted, that could have been because they were leading by five runs at the time. But, it's still an important point. After seeing his first outing, I'm feeling better and better with Gervacio as the eighth inning guy to Lindstrom's closer. I guess that leaves Brandon Lyon in the seventh inning role? Could that even happen? What would the over/under on critical FanGraph columns be? 20? 30? How many rhetorical questions can I ask to end this section? (that answer is six)

Defensive returns: When the Astros signed Pedro Feliz this offseason, it was seen as a move by the team to emphasize defense. After all, that's why they didn't try harder to bring back Miguel Tejada right?

That defensive philosophy was on display Monday night, as guys like Manzella, Roy Oswalt, Michael Bourn and yes, Carlos Lee all made good plays to help limit the runs San Fran scored. Oswalt didn't have any plays as spectacular as Mark Buerhle, but he did start a nifty 1-6-3 double play. Bourn made a couple nice running catches, including one up against the bullpen in right.

Lee even got in on the action, but not in the way you might think. Lee played a couple hits off the wall in left well enough to hold at least two Giants hitters to singles, when they could have easily gotten doubles if he had overpursued the ball.

It wasn't the most spectacular start to the season defensively, but it was a move in the right direction. Am I forgetting any plays?

Comment of the Day: This is a new feature we'll be adding. Right now, we'll just highlight the best comment from the previous night's game thread. In the future, we'll also add a leaderboard to show who had the most comments each day in the game threads.

I’m about to puke up my nachos

That's in response to this story that the Astros will be adding a Taco Bell Sauce Race this season. It's also funny, because one of Joe's nicknames for Mills is Nacho. Maybe that's only funny to me, but it still gets to be Comment of the Day.

Let's talk about HGH: We've talked about performance enhancing drugs at various times here. In fact, the last time we did, it was one of the most heated discussions I've seen on TCB. I wonder if this post will generate the same type of conversation.

What this articledoes is make my case for me. Basically, it cites a number of articles to prove that there is NO PROOF that HGH actually enhances an athlete's performance. The article also helps set out the problems with developing a test for HGH and whether it could be reliable.

I'm not an exercise science major nor do I want to be an expert in that field. So, I'm not going to wax poetic about biomarkers. I do think it's interesting, though, in how similar this is to how they test for steroids. After all, the steroid screenings don't look for Wistrol or whatever anabolic steroid an athlete is using. Instead, it looks for the biomarker of raised testosterone levels. If that level is a certain percentage above normal, then the test comes back positive. So, there is a precedent for this kind of test. However, I'm not so sure they NEED to perfect such a test for HGH. Seems like that money could be used in many more useful ways.

The 'Character' Concern: Another really cool link I found in the past few days was this one on THE BOOK blog. One of its authors, MGL, did a study on whether 'good' character guys helped their team more than 'bad' characters. Surprisingly, he found that there IS a correlation.

Does this validate the Astros for how they have conducted business in the McLane era? After all, both Biggio and Bagwell were pretty good character guys. At the same time, the club had its most successful run with notable 'bad' character guys like Jeff Kent and Roger Clemens.

Does this also validate the draft strategy of passing over questionable character guys? Will it lead to the Elijah Dukes in future drafts slipping or becoming the exploited resource for smart drafting teams? There are a ton of interesting questions that studies like this generate. My favorite part of this all? Knowing that I can feel good about 'rooting for the good guys.'