Let's just forget that pesky Reds series even happened. I mean, those pitchers were obviously due. And Ryan Hanigan was listed by Bill James as one of the hottest hitters in the majors. So, call it a mulligan. Let's move on to the Braves. First, we'll dive into the last two nights' worth of starting pitcher data.

Roy Oswalt - Roy was really dealing on Thursday, picking up a career milestone strikeout that ranks him 12th on the active strikeout leaderboard.

The pitch that really jumps out here is the changeup. Seven swing-throughs on 19 pitches is amazing stuff. When Oswalt added the pitch a few spring trainings ago, hitters quickly started saying it could be his best pitch. On Thursday, it clearly was. His change isn't as slow as his slow curve, but it has a similar movement profile to his two-seamer. He also felt comfortable with the pitch to not worry about placement, as his Nibbleness score is pretty high at 6.46. Oswalt was very efficient with all his pitches, throwing for strikes 70 percent of the time and only missing that mark with his curveball. As we explored last time, Oswalt has been throwing his curve at the bottom of the zone and doesn't always get the calls, which could explain that percentage.

His fastball's velocity was good, but didn't have as much tailing movement as it normally does. Oswalt still got three swing-throughs with the pitch, so something must've been working right. It could have been his location, as Oswalt was able to post the lowest 'Nibble' score at 3.91 that I've seen this season while throwing the pitch for a strike almost 80 percent of the time.

How did his velocity hold up over time? Was Mills right to send him out for the seventh inning? 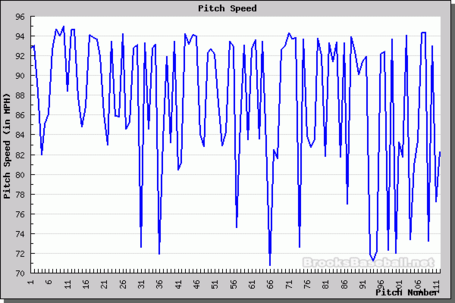 As you can see, he was still hitting 94 MPH around his 95th pitch, meaning his arm was feeling fine. Most likely, Oswalt just hung a pitch to Votto when he was trying for a ground ball to get out of a jam. That happens sometimes with him and shouldn't have been as big a problem as it was, if the Astros could score any runs.

Paulino worked almost exclusively off his fastball in this game. Can you blame him? He was consistently hitting 96 MPH and touched 98. His four-seamer had a good bit of sink on it while tailing in on the hands of righthanders. Of course, that also could have been the reason Paulino was only able to throw it for a strike 53 percent of the time.

Clack and the rest of you readers have really harped on Paulino to throw his changeup more often. Jim Deshaies also got into the action during Wednesday's telecast. What did Paulino do? He threw five of them all night. He also got one swing-through and had about an eight MPH difference on it than his fastball. Combine that with a slider that got six swing-throughs in 26 pitches and Paulino was really dealing. Of course, his spotty command of the fastball left much to be desired.

Let's look at his speed chart. 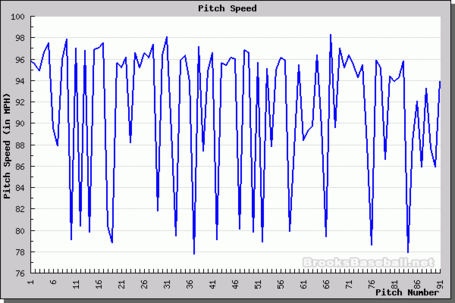 Paulino was pretty consistent throughout the night. He started at 96 and ended at 94 without much of a dip between. You can also see just how many fastballs he was throwing early in the game. That may have been by design, to catch batters off-guard. The reason I bring this up is I read an article earlier today that mentioned how David Price is using the same philosophy that the Rays used with Edwin Jackson; that is, he's taking something off his fastball to better locate it, then dialing it up to 94-95 in important game situations. The added velocity gives the pitch more life, which makes it harder to control. The Rays' thinking is that this tradeoff is acceptable, since you'd rather make it harder for the hitter to make solid contact. Maybe this is something Paulino should consider. I'd rather have him sitting at 93 with control than at 96 without it.

General's Watch: Nothing too exciting here, with the exception of Mills' decision to unbury Kaz Matsui for a game. That paid off with a 1 for 2 night with a walk for the second baseman and may be the first signs of him coming out of his early-season slump. Of course, it could also be a slight blip before he struggles more. It was also one of the few times that Mills has played Tommy Manzella and Matsui together. Manzella was lights-out defensively but the two do pair to make the strongest defensive infield alignment.

The other thing we can nitpick slightly is Mills' use of Towles as Oswalt's catcher. Roy has shown an affinity for certain guys in the past and doesn't seem to be connecting with Towles. The only reason I bring this up is that it's somewhat of a baseball tradition to have 'personal catchers'. Mills hasn't really used Quintero and Towles exclusively as anyone's particular catcher, almost alternating the two in the lineup instead. Let's keep watching this situation to see if Mills falls into any particular patterns or if he keeps the starts spread out pretty evenly.

Comment of the Day and Leaderboard: How best to describe Wednesday night's game?

Alliteration proliferates for me

Let's put up some runs!

Biggio and Bagwell for the HOF!

Have to give a shout out to the biggest Astros fan in Korea! And for your Thursday leaderboard...

Draft Update: I forgot to include two notes about the upcoming Rule IV draft in June. First, I saw this note on Twitter from AOL FanHouse's Frankie Piliere:

I'm not even really sold on Cox at No. 8 for the Astros, but this still frustrated me. Bobby Heck is incredibly good at his job, but an impact bat at a position that's been a need since Morgan Ensberg was on the team? It's too good to be true. That's why the Pirates will take him.

The second thing I saw was this article over at Baseball Prospectus. It's a mock draft, but it's not. Basically, it talks more about system needs and what the team's have been rumored to be doing. The Astros are said to be going 'deep' on college arms and have followed Chris Sale, who's at Florida Gulf Coast University. He's 21 this season and throws in the low 90's/upper 80's. With this draft being so deep on pitchers, Houston's brass could be trying to get a pitcher at 8 and wait for someone like Christian Colon or Rick Hague to drop to No. 19.

But even if that doesn't happen, when we asked one old friend of Berkman whether he thought Berkman had any interest in playing for another team, the friend replied: "No. Maybe for two months down the stretch somewhere with a chance to win. But the truth is, he's more likely to end his career in Houston. He loves being home."

Sounds very much like Berkman would accept a trade if it meant helping the team, but his goal is to stay an Astro long-term. The beginning of this season also showed his importance to this offense. If you remember, both Craig Biggio and Jeff Bagwell had periods where it looked like they would not be able to reach contract agreements with the Astros, only to have things work out in the end. Knowing how Drayton McLane feels about Lance and how Berkman feels about playing near home, I'm more and more confident he'll get extended.

Rangers Have A Problem: The sale of the Texas Rangers from the Hicks Sports Group to a group of investors headed by Chuck Greenberg has still not gone through. Creditors to the HSG have held the sale up because there is not enough cash up front to pay off the previous ownership's multitude of debt. One of the concerns about the Greenberg group's purchase is it didn't have the most upfront money, but was most palatable to current MLB owners.

Flash forward to now. This article by Evan Grant of the Dallas Morning News suggests an entirely different set of problems if the sale does not go through next month. Apparently, the Rangers will run out of operating income and will have to borrow money from MLB to meet payroll. This will mark the second straight year the Rangers have had to borrow money from Bud Selig's office to make ends meet. It also creates a new creditor involved in the process, when the team cannot pay off it's existing creditors.

Will this sale go through? Probably so, but it's creating all sorts of financial headaches at the very beginning of the new ownership's tenure. It's anyone's guess how that will affect the payroll in the immediate future. Why does this matter to you Astros fans? Because the Astros could be sold in the next few years. They were almost sold back in 2008. Drayton McLane doesn''t carry the same kind of debt service that the HSG did, but the Astros new owners will probably resemble this group rather than the Ricketts' bid for the Cubs or Jeff Moorad's purchase of the Padres. Thus, we're seeing a worst-case scenario for what the Astros might have to endure.