In case you missed it this weekend, we had a special batch of Saturday and Sunday news and notes. So, today we will finish off Sunday's romp to sweep the Pirates.

Brett Myers: The site where I've been going for these recaps (brooksbaseball.net) is down today, so we'll have to muddle through with the great info over at Texas Leaguers.

Again, Myers worked off four main pitches but had less success with his curveball than in his last few starts. Unsurprisingly, it was also the pitch least likely to be put in play against him. Myers replaced that curve with a slider that was working very well for him, getting four swing-throughs with the pitch. One of the problems with this start for Myers was he had a ton of pitches in play. The weird thing there is that he didn't throw as many strikes as he has in the past, coming just shy of 70 percent strikes with his sinker. In past starts, he's cleared 70 percent easily with multiple pitches.

His sinker actually had a ton of horizontal movement on it Sunday, running in on the hands of the Pirates. Unfortunately, they also hit it pretty well, putting it in play almost 40 percent of the time. His average velocity on the pitch was just shy of that on his four-seamer and didn't seem to deviate much from where he's been in the past. In short, this kind of stuff is what we can expect out of Myers this season.

I wish I had a speed graph to show you his velocity over the course of the game. Alas, no luck. What I do have is his average ball path from the top and from the side. We can't draw too many conclusions from them, but they are fun to look at. 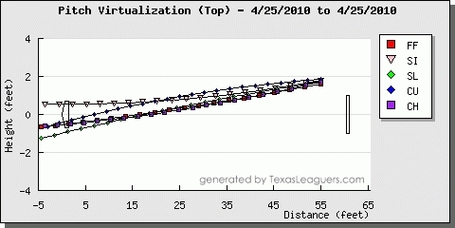 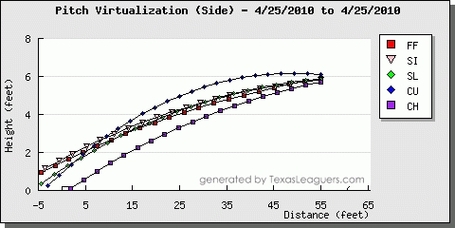 I know I said these weren't for analysis, but I'm always fascinated by the bend Myers gets in his curveball. Look at that path. It falls off a freaking table about fifteen feet out. However, the way it stays so high before breaking probably means batters have an easier time recognizing the pitch after it's thrown. Like how I just made a microsecond reaction seem easy?

More on Myers: Robolungren astutely put one of Myers postgame quotes in the game recap Sunday, when Myers was quotes as saying he's a "120 pitch pitcher" and he didn't want to come out of the game at 90 pitches. The whole quote:

"I didn’t feel like I was tired or anything like that," Myers said. "I wanted to stay in there, but it was probably a good time to get me a break there and not let me throw 100 pitches every time I go out there, and be fresh for the next one."

Mills came back with a pretty snappy rejoinder:

So we've got two conflicting numbers of pitches that Myers claims. He says he's a 100 pitch guy and Mills said he wanted to throw 20 more than that. Let's look through his game logs at Baseball Reference to see what's what.

Lee collapses with a heart attack in the dugout

Out for six weeks

TCB Fantasy League Update: Three weeks into the season and there are only three undefeated teams left in the TCB Fantasy Baseball League (brought to you by CBSSports.com). Who are those teams?

That's right, my quest for league dominance has commenced with a couple big victories in the early going. Who has been my best player? Mike Pelfrey, who has 81.5 fantasy points over the first three weeks. Not bad for a 19th round pick. My top position player(s) is a tie between Dan Uggla and Josh Willingham, both late round pickups as well. Each guy has 76.5 points to anchor the my lineup.

The boys at Bud Norris Facts have been held up by Albert Pujols, who has 100 points so far. Surprisingly, Justin Morneau and Miguel Cabrera both have more points than El Hombre. Pujols has also been helped by the fact he's been in on 21 double plays, good for 21 more points and ranking him in the league's top three. BNF's top pitcher has been Andy Petttite with 81 points.

Lancealot's best player? Barry Zito! I know, I was surprised too. Should we dock him points for capitalizing on the Astros poor start with poor Zito? Barry has 85.5 points to lead his team, just ahead of Brad Penny's 83.5 points. Seriously, is his entire pitching staff Astro-killers? Mark Reynolds has led the way offensively for him with 74.5 points after belting seven home runs already.

Still, there is one more team in the top 4 of the latest power rankings. Hangin' With Cecil Cooper (Nick H) is just behind Lancealot for tops in the league after posting a league-leading 1094 points through three weeks. The rest of this week's standings can be found here.

General's Watch: No real big stuff to follow here, besides Mills not using his late-inning guys for once this week. I thought it was a good move to keep Lance Berkman on the bench for the ninth inning, since his knee was obviously bothering him but it looked like he was trying to stay in the game when they showed him in the dugout. Good call, Nacho.

Dominican Troubles: Big stuff going on down in the Dominican Republic. With new head honcho Sandy Alderson in place, the reform process has begun. Too bad the republic itself seems loathe to speed the process along. This excellent rundown by Nick Collias over at MLB Trade Rumors hits the high points on what's going down in the Dominican. The story also links to Yahoo writer Jeff Passan's piece about how hard Alderson's job will be. Both sources are worth your time.

This is doubly important for the Astros, who just opened a million-dollar complex down there this season. I realize the scouts have the right to shut down access to players (as that's their only currency), but for MLB to retaliate by shutting down a prospect game? This thing could get very ugly.

I also wonder if MLB would take this tact if they weren't gearing up for an international draft sooner rather than later. Of course, one of the barriers to that could be the DR's government. That's one of the obstacles we've discussed in the past to a world-wide draft, because the labor laws are so different in each country. Setting up practical limits and working within the legalities of each country could prove a nightmare, especially if said country decides to be difficult about the process (hello, Hugo Chavez...). Even if MLB wanted to expand the scope of the draft, stories like this show it's probably a decade away.

What's that? Praise from FanGraphs?: Yes, Dave Cameron really did write something good about the Astros earlier today. In his What We Learned feature for this week, he threw out some impressive numbers about the Astros resurgence. Like how the team was third in wBOA last week at .363 and first in xFIP at 3.31.

I was mildly surprised by the wOBA number being so high, but all those extra-base hits against the Pirates helped that tremendously. The FIP number wasn't as shocking, but I'll defer to Stephen for more, as he's got a whole story on the Astros starting rotation for Tuesday.