One of the scariest plays I've seen in a while happened last night. Here's hoping everything turns out alright for Mr. Jaukabauskas.

Wandy Rodriguez - This may have been Wandy's finest start of the season. Let's see what he threw:

Wandy's curve returned to form in this one, getting 17 percent swing throughs on the 23 pitches. He also was able to throw it consistently for a strike and get good movement on the pitch. I'm a little surprised he worked off his two-seamer so much and that it was the pitch he got so many swing-throughs on. However, his fastball movement was a little erratic and there could have been some four-seamers lumped in here. The two-seamer wasn't sinking as much as we've seen from other starters this season, but it was plenty effective. Also thought it was interesting that both fastballs averaged about the same speed. Wandy may not have a lot of pure stuff, but he gets a ton of movement on his pitches.

The change also seemed to work well for Wandy, as he threw all 12 of them for strikes and got three whiffs on the pitch. The way this chart looks, his change profiled very simiarly to his two-seamer, but with a little less movement away from a right-hander. Add to that the fact his change was only five MPH slower than his fastball and there might have been a little trouble categorizing this pitch.

The other big thing to see about Wandy's start the dropoff in his velocity late in the start. 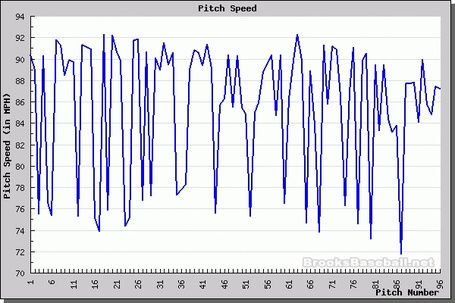 As you can see, around his 90th pitch, Wandy velocity never recovered. He was able to consistently hit up to 92, but was still above 90 MPH around 75 pitches. Since his pitch count was low, Mills let him go out for the eighth. As you can tell, he didn't have the best stuff in the frame and MIlls immediately brought in Brandon Lyon with one out on the board. Lyon got out of the inning unscathed, holding onto Wandy's victory.

It also becomes more and more obvious as we see more of these speed charts that 100 pitches is a very arbitrary figure for a start. No matter if you're talking about prospects or proven pitchers, there are more important things than sticking to a number. For instance, velocity readings show when a guy is tiring, as does a change in his mechanics. Saying that always happens around the 100th pitch is seeming more and more silly to me.

General's Watch: The big thing to note here is that Mills let Wandy start the eighth inning, but still made the decision to pull him when things weren't going well. Even though Wandy wasn't getting shelled yet, Mills still astutely went to the bullpen. I like this move, since it both shows a confidence in the starter and a willingness not to let things get out of control.

As I said above, pitch count was no consideration here. MIlls was able to use his own judgement to make a good call and save the Astros some runs. It also speaks well of Brandon Lyon that he's able to be used in situations where he's not entering an inning clean. Some late inning relievers don't like that situation at all. Good to see him take to it so well.

We also saw Carlos Lee sit down for the first time this season. He was replaced by Cory Sulivan, who paid off at one point by making a nice running catch in left center that Lee would have never gotten. One game does not make a career, but Lee needs to get things turned around sooner rather than later. I wouldn't be surprised if he sits out of Sunday's game as well in favor of Jason Michaels getting a routine start in the outfield.

Comment of the Day and Leaderboard: Need I say more?

Sullivan thrown out at home

he is a five tool player.

Damn the Sample Size: A throwaway comment in last night¹s game thread about how Pedro Feliz enjoys hitting in the three-hole gave me an idea. It¹s not statistically significant, because we¹re only talking about a handful of at-bats, but I thought it¹d be fun to see where the Astros hitters have had the most success in the batting order and then make the best lineup from that. Here goes (best lineup position, followed by stat line and number of games at spot):

Note: these numbers do not reflect Saturday¹s game

It makes me sad how many of these guys are better off batting in the bottom third of the order. Worse yet, most of these guys aren¹t even above .250 at their best lineup spot. Even though the Astros have been slowly pulling out of their early-season funk, it¹s worth noting just how epic it was.

Now, for a non-scientific lineup optimization that Stephen will hate.

I¹d even be okay with switching Bufalo for JMike, if the situation arises.