A special Saturday edition of Astros news and notes coming right up.

Roy Oswalt - Boy, how good as the Wizard been this season? Even when he ran into trouble late, Oswalt still managed to get out of the jam on the positive side of the victory column for the second time this season. To put his 2-2 record in context, it took him until his eighth start to get his first 'W' and his 12th start to get a second. So, he's definitely been off to a better start than in 2009. What was he throwing last night?

His velocity and movement might have been down on his fastball and he may not have gotten as many swing-throughs, but Oswalt was getting plenty of ground balls. He was throwing his sinker for a strike 75 percent of the time, which is why 18 percent of the batters he faced grounded out in the game. That was the second-highest outcome behind a strikeout. Roy's curve wasn't as accurate as it's been in past starts, which may explain some of his whiff problems.

Interestingly enough, his four-seamer didn't have a ton more sink than his two-seamer. In fact, the two pitches were lumped in here as almost the same pitch. The only real difference were the sliders had more average horizontal movement. Still, the four-seamer had more vertical break last night than in his previous starts while his slider broke more away from right-handed batters than it did downward. 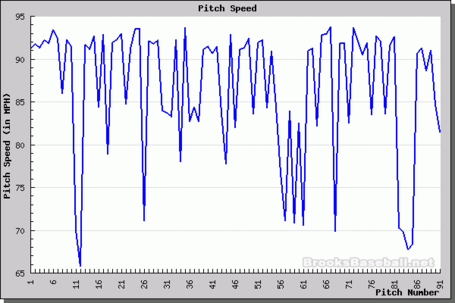 You can see by his velocity chart that he still felt pretty good at the end of his start, losing very little velocity by the end. Roy's not the hard thrower that Paulino is, but maintaining his velocity late in games is still important. What I'm seeing from these graphs is that Mills and maybe more importantly Brad Arnsberg have a solid handle on when to pull a pitcher before he loses effectiveness.

One of the things we looked at after Oswalt's last start was his location around the strike zone. 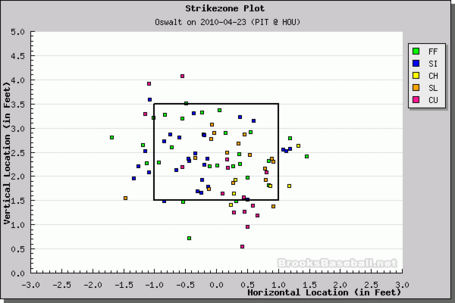 Unlike last time, Roy worked both sides of the strike zone equally. i'd have to lean towards his last location chart being a product of the umpire's zone. You can see that Oswalt pounded the middle of the zone with his fastball quite a bit, which tracks with what he said about 'losing his mind' after the error.

There's also a cluster of pitches right along the edges of the strike zone. Instead of working the bottom of the zone like in his last start, Oswalt worked more side to side on the zone. The curve was consistently low in the zone, which suggests part of the problem throwing it for strikes may have been an umpire who wasn't giving the guys the low calls. Credit Oswalt for consistency. His cluster of curves there below the zone show he has great control. 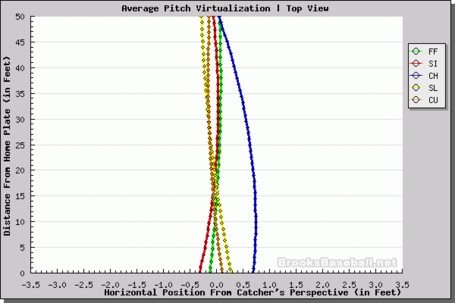 How filthy is that. Look how all those pitches are moving in what looks like three different directions. Hitters are expected to make something out of these pitches? And, just when they're getting used to the four that break in different directions but start breaking about the same time, he'll throw that big bending curve on the outside of the plate. Just filthy.

Pitchers recovering: Yorman Bazardo threw a couple games for Round Rock and is recovered enough to be reinstated from the DL. He was outrighted to Round Rock and cleared waivers, but has three days to accept an assignment there. I don't see any major league team giving him a roster spot, so it may come down to where he wants to pitch. The Astros gave him a shot in the big leagues last season, so he might have some loyalty to Wade. Adding Bazardo to the Express mix would certainly help out an average starting staff.

Also recovering is Sammy Gervacio. Slingin' Sammy has made a couple outings for the Express, with fairly good results. He gave up a run in his first but only gave up one hit while striking out one. In the second, Gervacio didn't allow a hit or a walk, but also didn't strike anyone out. Sounds like he could be returning to the big leagues soon. Should we assume Lopez will be sent down then? Is there someone else who could face the axe?

General's Watch: We are definitely starting to see that Mills will use a Lyon, Lindstrom combination in the late innings. That's been more and more obvious since the Astros started winning games. As long as Lyon remains effective, I don't have a problem with this.

The salient point here is Carlos Lee was lifted for a defensive replacement late in the game. It's the first time I can remember him being pulled for a better defensive player. Coming a day after his horrendous error in left, does this mean MIlls will start deploying defensive replacements more often? Was the reason he hasn't done this more often because the Astros took so long to actually win a game?

Attack of Zorilla: You might have seen this in the game thread last night (or on the internets, the news or any manner of news sources that are more timely than this), but Ben Zobrist was given a contract extension. The figures have been reported differently in many places, but from what I've seen, Zobrist should earn at least 18 million with a possibility to earn 30 to 50 million by the end of the five years (assuming all the option years are picked up).

That's a lot of money for a player who had one great season and one good season so far on his resume. Zobrist has shown a skill for getting on base throughout his career, including the minors, so at least he'll have that skill to fall back on if his power fails him. It's a gutsy move for a cash-strapped team and just reminds us how much money has been wasted on Kaz Matsui the past few years.

Comment of the Day and Leaderboard: I know it's cheating, but I'm going with Farmstro's latest haiku, which crossed the 300 syllable mark on his Quest for 3,000 Syllables.

Bushue and Grimmett team up

To shut down Asheville

'Team' was the 300th syllable of the season. He should hit 500 syllables on May 4th and is planning an event to commemorate it. In preparation for this accomplishment the blog that Follows the Astros of the Future is planning a Game listening/Twitter experience during the May 4 Round Rock Express game vs. Nashville.  That contest will take place at 11 a.m. Central time.

Check back at the Farmstros website for more information as we get closer to the event.

This Day In Astros History: One thing I failed to mention about this feature. When I do the game recaps, I usually have a theme in mind for why I picked them. For instance, the first time was dates when the Astros opened a new ballpark. Yesterday's was years the Astros either made the playoffs or had a great shot before the strike. Why am I telling you this? I though it might be fun to see if you could guess why I chose those particular games.

In 1972, the Astros beat future Hall of Famer Ferguson Jenkins in the 11th inning as catcher Johnny Edwards hit a walkoff solo home run in the bottom of the inning. Jenkins pitched the entire game, striking out five and walking two. Jim Ray got his second victory of the season in relief for Houston while Ken Forsch struck out four and walked five in nine innings of work. Lee May accounted for the Astros other runs with a two-run home run in the first inning.

In 1979, there was no game on April 24th. But, on the 25th, Cubs pitcher Dennis Lamp shut out the Astros, throwing a five hitter while striking out four and walking one. Houston's Verne Ruhle lost his third game of the season, giving up seven hits and four earned runs while striking out three and walking none. Dave Kingman hit a home run for the Cubs while Alan Ashby was the only Houston hitter to have a positive WPA at .011. Ashby was hitless, but he did walk once and strike out once.

In 1992, Darryl Kile beat John Smoltz 4-2, running Kile's record to 3-1 on the season. Kile threw eight innings, giving up four hits and two runs (one earned) while striking out three and walking one. Doug Jones picked up his sixth save of the season, needing just 10 pitches to retire four batters (he gave up one hit). Luis Gonzalez was the offensive hero of the game, hitting a two-run home run off Smoltz with one out in the fifth inning. Gonzo was 2 for 4 with a double, three RBIs and a run scored, adding a WPA of .375.