Have you every thought about what owners did before they owned a team? Did they have any background in sports? Is there a difference between football's owners and baseball?

Both sports have their fair share of hands-on owners. It seems like more of the owners in football have played, coached or been involved in the front offices of teams than their counterparts in baseball.

Only three baseball owners have any playing experience at the collegiate level and that includes Carl Pohlad, who played football in college, and Fred Wilpon, who played high school baseball with Sandy Koufax. Football not only has Jerry Richardson, a former NFL player, but Jerry Jones (collegiate captain at Arkansas), Al Davis, the Rooney family, JIm Irsay, Clark Hunt (a collegiate soccer player and stakeholder in MLS) and Robert Kraft, who played something called 'lightweight football' at Harvard. The majority of baseball's owners are former lawyers, it seems.

Why am I bringing all this up?

The NFL draft is tonight, kicking off three days of trades, picks and idle speculation galore. An event that would put any normal person to sleep has turned into prime time viewing. Baseball is trying to do the same with its draft, airing the first round live on MLB Network last season, but there's still a gap between the two. Most importantly, baseball draft picks can't be traded. In fact, players picked in the draft can't be traded until the one-year anniversary of their signing.

They call that the Pete Incaviglia Rule, because the former Oklahoma State slugger forced the Montreal Expos to trade him because he didn't want to spend a day in the minor leagues. Of course, since he hit 30 home runs in his rookie season, he may have had a point. Still, baseball owners had a fit and promptly passed a rule forbidding teams from trading players like that.

Football has had two high-profile, similar situations in the past 25 years. What happened then? John Elway successfully talked his way out of Indianapolis and into Denver and Eli Manning stiff armed San Diego for the New York Football Giants. In neither case did ownership react by making a rule forbidding drafted players to be traded. In fact, the precedent for draft pick trading goes back even further as then-Browns owner Art Modell traded for Washington's first overall pick in 1962 to take Syracuse running back Ernie Davis. As tragic as that story turned out, it shows that football owners have never been afraid to trade draft picks/players.

Why is there a difference here? I know the two sports are fundamentally different, as NFL players will jump directly to the big league while baseball players take two to five years. However, why does one group of owners control so much more of the power over player movement? Is it because more baseball owners are lawyers? Is it all because of precedent? Or it is because of the power of the respective unions and how much they care about future members?

I'm not sure what the right answer is here. On days like today, though, it does make you wonder which set of owners really has more power. Onto pitching graphs and more notes fun.

Myers didn't throw an equal number of pitches, as he's trended towards in the past, but he did get swing-throughs on all of them. His velocity was maybe up a tick, as he hit 92 with both his two-seam and a four-seam fastball. His sinker had a lot more horizontal movement in on the hands of righties than it has in past games, but didn't have the same drop. On the other hand, his curve was bending away from righthanders pretty good while falling off the table. His strike percentages were right in line with what we've seen from him this season (hovering around 70 percent) with the exception of his sinker. Now, that could have been because of that extra movement on this particular night. He was trying to nibble a bit with the pitch and could have missed out on some borderline calls.

What stood out to me, when I was reviewing his data, was his release point. It seemed a bit more jumpy than I'm used to seeing on these game logs, so I went back and looked at his season data.

But, when we compare to 2009, you'll see Myers just doesn't have the cleanest delivery or the same release point each time:

Could that help explain why he gets hits early in the game but not late? Does he change his release point as the game goes on? I assume that would affect how hitters picked up the ball, but don't know it totally explains why he's so much better the second and third times through a lineup. I'm open for suggestions, though.

Bud Norris - Is it weird that Alyson Footer called him 'Studly Budly'? I mean, I know she was joking and all and it doesn't have the same ring to it that Cudly Budly does. At any rate, let's get into what he threw last night.

Once again, Bud works off two main pitches, with a changeup thrown in for good measure. The interesting thing about his changeup is that it's been his best pitch for swing-throughs. Look at this chart of his season's percentages:

He didn't have as much problem controlling the fastball in this game, but his changeup is definitely a good pitch for him. Only eight percent of the changes he throws are hit into play. Seems like he should be throwing it more often, no? I don't think that's in his mentality, though. I really get the impression that Bud is a 'throw hard, get outs' type of guy. Consider his speed chart from last night.

Notice how Bud is throwing harder in his last ten pitches than he did in his first ten? While that's great to see from a stamina perspective, it also lends credence to the theory that he was 'overthrowing' in the fifth when the Marlins started scoring runs. Compare his strike zone chart in the fifth to that in the entire game. 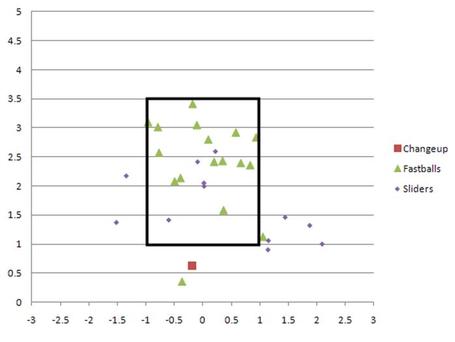 Here's the chart Evan used in the game recap:

Bud was hitting a lot more of the zone in the fifth than he did in the rest of the game. If you run with the theory that he was overthrowing, it looks like he sacrificed better control for more speed. It's also interesting that he stopped using his slider as much. Since that pitch helped him cruise through the first four frames, that's a little disappointing.

Comment of the Day and Leaderboard: Suffice it to say, I'm a Monty Python fan. Now go away before I taunt you a second time...

“…And now for something completely different…”

General's Watch: Fourteen games, fourteen different lineups. Three biggies in this game: the use of Keppinger at shortstop, the continued deployment of Cory Sullivan as the first bat off the bench and the green lights for Berkman and Lee.

First up, Kepp as a shortstop. In the game thread, we all talked about whether Manzella would have made those plays Kepp missed. I don't want to get into that, but I do want to talk about the 'hot hand theory' and whether Mills is correct to be putting his best offensive players out there regardless of defense.

One of the traits MIlls has shown early is to never bury anyone. Towles and Matsui have struggled in the early going, but Mills has kept plugging them in the lineup. As Zach Levine pointed out yesterday on his blog, both Q and Towles have started about the same number of games. It will be interesting whether Q's good game at the plate last night will earn him more playing time.

Next, I am continually amazed that Cory Sullivan is used as much as he is in pinch-hitting situations. As the only lefty off the bench, wasn't Mills going to deploy him more sparingly? He's not the best hitter on the bench (that honor goes to either JMike or Blummer). He is in an extended funk right now, despite the big pinch-triple he hit in the first homestand. Why is the still the first guy off the bench most nights? I wonder if Mills just loves his speed. If that's the case, can we call up either Brian Bogusevic or Jason Bourgeois (once he's healthy)? Either of those guys would hit better than Sullivan. Then again, it takes a special mentality to be a good pinch hitter. After all, you're not playing regularly, you're sitting around for most of the game, then you're asked to face a guy you haven't seen in a generally pressure-filled situation. It's not for everyone. I just think Mills has better options than Sullivan.

Lastly, do we need to discuss the steal attempts by Lance "The Big, Slow Puma" Berkman and Carlos "I'm not as Fast as a Caballo" Lee? Both were bad, bad situations and cost the Astros precious base runners. Both times, it looked like the guys made the decision on their own instead of being given the sign. Does that mean these two have a green light to steal any time they can? Is that a good thing?

Payrolls and Attendance: Two somewhat depressing articles about the Astros and money. First, the payroll numbers were released recently and the guys over at Biz of Baseball compiled them. The Astros payroll did go down from 2009, losing about 10 percent of last year's total and dropping eight spots to No. 13 overall. While they are behind the Cubs by a lot, they're right in line with the Cardinals salary and are way ahead of what Milwaukee, Cincinnati and Pittsburgh are spending. Didn't I hear Drayton wanted to cut payroll by 15 million, though? Are we still getting conflicting reports about how much the Astros 2009 payroll was on Opening Day?

Second, attendance around the major leagues has held steady only because of the big crowds being drawn in Minnesota. The Astros have seen one of the biggest dropoffs in attendance in the league, as they are No. 9 on the list when sorted by biggest losses. They're down about 2,700 attendees a game in 2010, though Bernardo Fallas recently talked to Astros management about this and they aren't worried. The upswing in promotion nights should also not be seen as a bad sign, according to club officials. What about the acres of empty seats I saw on the game telecast last night? Should that be a bad sign?

Playoff Odds: I don't know how many of you have heard about Cool Standings, but it's a pretty neat site. They constantly run simulations based on team's records to get a percentage chance of each team winning the division, the wild card and making the playoffs. The Astros are currently sitting at 1.6 percent chance of winning their division and 2.1 percent chance of making the playoffs. That's right, 14 games in and the Astros have a 1 in 50 chance at making the postseason. Can we send this section to Richard Justice?

The Cardinals are behind only the Yankees and Twins in percent chance that they'll take the division. I don't know what I'm more offended by, that only Baltimore has a lower percentage chance of making the playoffs or that Washington AND the Mets have better odds than us? Ugh.

It also gives credence to this excellent column over at the Baseball Analysts, discussing why radical realignment might not be a bad idea.