It's been a long weekend filled with Astros victories and great pitching performances. So, let's jump right into those matchups with another daily dose of Astros news and notes. One small addition today is the On This Day In Astros History section. I'll try to keep that as a permanent fixture to highlight quirky things that have happened to the Astros over the years. Let me know if you like it, or if you have something to add to an upcoming edition.

Wandy Rodriguez - We have all fretted about Wandy's stuff and his health for the past couple starts. Let's look at what he did against the Cubs.

First off, his fastballs were really working for him, as he threw each for a higher percentage of strikes than in his previous two starts. He also got a ton of swing-throughs. This was mildly surprising to me, since the comments in the game thread seemed to indicate he wasn't missing many bats. 12 whiffs in 105 pitches is a solid percentage. Of course, most of those whiffs came on his changeup, which is unusual for him. On a day when he struggled to locate his vaunted curveball, the change broke away from lefthanders and had a very similar movement profile to his two-seamer. The two pitches only had a five MPH difference in speed, but it's enough to throw a hitter's timing off just a tad.

The other comment in the thread was that Wandy seemed to be nibbling at the plate too much. These numbers certainly don't bear that out, since a Nibbleness score in the upper 5's is about where Roy throws most games and he's hardly a nibbler.

The other encouraging thing about this start for Wandy is his speed graph: 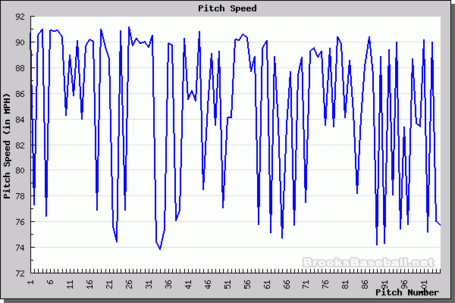 Losing only one MPH off his fastball from the first inning to the seventh shows pretty good endurance. It also makes me believe we're not dealing with an injury here. Instead, Wandy's ineffectiveness before Sunday could be due to his line drive rate. Through three starts, it's at 26.8 percent. In his career, his LD rate is at 20.9 percent and it was 17.9 percent in 2009. So, he's given up almost 10 percent more line drives this season than last. That's going to even out. Which is good news for my fantasy team.

Roy Oswalt - What can you ask of Roy now? He's completely turned around his disappointing 2009 campaign and is one of the few bright spots on this team through the first 11 games. How did he do against Chicago on Saturday?

Again, it's all in the fastball. while his velocity was down a bit from his previous game, Roy had the same movement on the four-seamer and got seven swing-throughs with it. He actually threw his sinker more often and had better velocity on that pitch than his four-seamer. If you remember our little trip down Pitch F/X lane last week, this probably had to do more with the classification systems than anything. If anything, I'm surprised with how few swing-throughs Oswalt got on the whole. Nine in 101 pitches is a little lower percentage than he's used to, but was able to throw enough of his pitches for strikes to make up for that.

If anything, Roy seemed to struggle with his control on the two-seamer. While 54 percent strikes isn't bad, it is highlighted by his 88 percent strikes on the four-seamer. Apparently, even though it had better velocity and more vertical drop, Roy didn't feel comfortable throwing the two-seamer in the zone. Remember that when you look at his strike zone chart next: 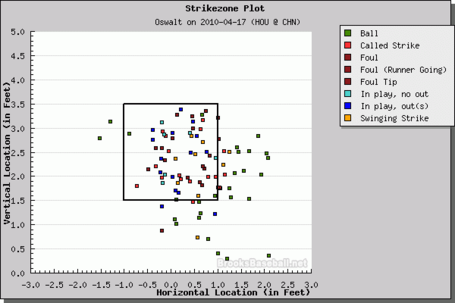 Basically, Oswalt decided to throw to one side of the plate and did that exclusively throughout the game. The Cubs did have two lefthanded hitters in the lineup, but Roy ignored an entire half-inch of the plate on the right side. That means he was more comfortable pumping that fastball down the middle of the plate rather than inside on the Chicago hitters. Can't argue with results, though. I wonder if this had to do more with the plate umpire rather than a specific strategy.

Felipe Paulino - Paulino's line got out of whack in a hurry during his last inning of work. He had trouble locating his fastball all game, however, and that caused him problems late.

His slider, though, was a very effective pitch for him. It even had a little bit of break towards righthanders, like a screwball. Probably just the sample size we're dealing with, but getting five swing-throughs out of 24 pitches is pretty solid. Paulino had great velocity on the fastball and is probably the strongest thrower in the rotation right now. The break on his four-seamer is very similar to Roy's fastball the past few games, only Paulino hasn't managed to throw many strikes with it. He did get two swing-throughs on the 68 fastballs, but may need to rely on his secondary stuff more often when the fastball isn't there. Paulino's velocity looked more in line with his start against the Phillies, throwing the fastball consistently in the upper 90's.

His curve is definitely more of a hard curve, with little downward break, but has almost a foot of difference in its vertical movement from the fastball. In that, Paulino has a nice change of pace pitch to get hitters every now and then. Interestingly, Paulino has the highest x-FIP of any Astros starter at 5.28. Only Brian Moehler and Tim Byrdak have higher x-FIP's on the team. Paulino also has been slightly lucky with his BABiP at .294, but not surprisingly so in either way. That tracks to the data, since Paulino hasn't been generating a ton of ground balls with his stuff.

A quick look at his speed chart shows that he obviously started tiring quickly in his last inning of work. His speed dropped dramatically compared to the rest of the game and he ended up in the most trouble he'd worked through all game. 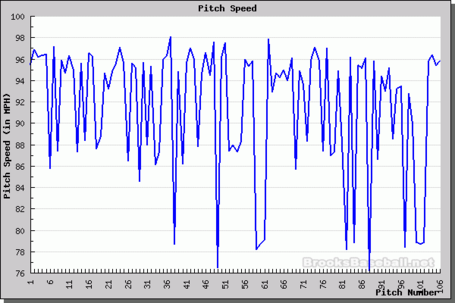 We'll talk more about this in a minute, but doesn't it look like Mills went to the bullpen a little too late?

The oft-mentioned 1983 Astros team also won its first series on the fourth try, taking two of three from Montreal at the Astrodome. The 2007 Astros won their third series of the year, sweeping a two-game series in Chicago. That team didn't win a three-game series until their 10th series against Cincinnati. Of course, that was largely due to a couple rainouts that shortened three-game series down to two (as was the case in the Cubs series). In 2009, the Astros won their third series in Pittsburgh, taking two of three. It's worth noting that the 2009 version of this club was 3-7 after 10. Our record after 11? 3-8.

Baseball Tonight put up a graphic after last Wedensday's loss to the Cardinals, showing the managers who had the longest streak of losses to start their careers. After two 19th century guys, Brad Mills came in right behind Alan Trammell, who lost nine straight with the 2003 Tigers. Mills, of course, won his next game to end the streak. It's a fortunate thing because that's all the comparisons we need with the '03 Tigers. Detroit didn't win a series until 11th series, a sweep in Baltimore, and went on to win just 43 games all season and just three games total in April.

So, it could be worse.

The General's Corner: The two things I wanted to touch on here were dealing with the pitching staff. Let's not get into comparing Jason Smith to Cory Sullivan just yet, okay?

First up, Mills seems to be walking a fine line with the starting pitchers. In the last five games, three of the starters finished the seventh inning while Felipe Paulino and Bud Norris were allowed to pitch through some trouble spots and go deeper into the game than they had previously. He's letting his guys pitch and work their way through a game, but he's not letting pitch counts get too high.I haven't seen one instance where an Astros pitcher threw more than 120 pitches in a game. In fact, Brett Myers is the only guy to throw more than 110.

Mills has also been locking into a bullpen rotation. Brian Moehler appears to be the odd man out, having pitched sparingly after the first week of the season. Guys like Chris Sampson and Tim Byrdak have been used quite frequently, however, and I wouldn't be surprised if Sampson becomes Mills' eighth inning guy until Brandon Lyon gets right.

The other peculiar story about Mills is this one from Brian McTaggart. It flies in the face of those Geoff Blum quotes about guys knowing where they are hitting on any given day, doesn't it? At the same time, I wonder if the reason Mills put out a lineup last Monday that moved Feliz up to third and dropped Pence down but then pulled it was because he hadn't talked to either guy beforehand. 11 lineups in 11 days, though? I hadn't realized it was that bad. This isn't the Bagwell/Biggio Astros where you can't jack with the order. This team was struggling offensively, so Mills kept tweaking until he got something that works. I like it.

Clubhouse Blues: Alyson Footer wrote an excellent entry on her blog at the tail end of the losing streak. She addressed a common question that she gets, what's the mood in the clubhouse?

[Y]ou'll pretty much find the same thing in just about every Major League clubhouse, no matter how good or bad the team is. Except for a few extreme instances, the mood is the same -- composed.

She goes on to talk about the cutlure around big league teams, how this is a profession for them. The comparison to football is also interesting. Baseball is by definition a 'forget it' sport. As soon as an at-bat is over, the player must put it out of his head. Don't dwell on success or failure too long, because you won't be able to concentrate when your number gets called again.

But, it is nice to see that the clubhouse is relaxed. One of the more disturbing parts of last season were all the reports about how the clubhouse had splintered and the players were openly hostile to manager Cecil Cooper. That's never a great situation to be in and I'm glad the Astros have moved on.

Comments of the Day and Leaderboards: Because I can't get enough of people ripping on the Backstreet Boys...timmy responding to a comment about Chris Johnson getting the start on Friday.

I thinks it's punishment

for Blum dancing to a boy band

And now for your expanded Top 10 leaderboard from the weekend.

On This Day In Astros History: In 1965, future US Senator Jim Bunning pitched a five-hit shutout against Turk Farrell in Philadelphia. Jimmy Wynn had two hits to raise his batting average up to .385 while Farrell lost his first game of the season, dropping his record to 1-1.

In 2000, the Astros pounded Orel Herschiser for seven runs and four hits in 1 1/3 innings en route to a 10-3 victory over the Dodgers. Herschiser hit four batters total in the game, including Richard Hidalgo twice and Shane Reynolds and Jeff Bagwell once each. Mitch Melusky had the big hit, with a two-run double in the first. It was the last game Herschiser started until June, when he pitched in the last three games of his career.

A happy birthday goes out to Leandro Cespedes, as the Lancaster righthander turns 23 today. Also celebrating a birthday today is righthander Carlos Gil, who turns 20. Gil pitched for the GCL Astros last season.