Game Diary: Michaels, Blum, and Moehler get it done for the Astros, and it's ironic- don't ya think?

Share All sharing options for: Game Diary: Michaels, Blum, and Moehler get it done for the Astros, and it's ironic- don't ya think?

What follows is a little experiment that David, Evan, and I tried out today. We had an open Google Doc throughout the game and we used it as a running diary. If we could do it everyday- we would. You can argue with a perfect 1.00 correlation for this idea and Astros victories.

This game was absurdly ridiculous. It's clear that the baseball gods have a wicked sense of humor and today they were feeling saucy. Blum, Michaels, and Moehler were the keys to success. If someone would have told me that the game would swing on their performance before the game I would have scoffed at them.

The only way to explain it that baseball gods just wanted to have a good belly laugh on a Sunday afternoon and the WPA graph serves as proof: 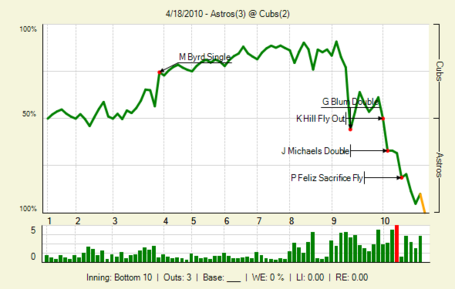 I'll save the running game diary for after the jump. But I'll keep the song of the day above the jump for your listening pleasure:

(E)- Feliz was just over matched there. That should be Lance taking those swings though, so you can't really blame Feliz. (S) - Damnit. Feliz K's looking on a full count.Bottom of the Eighth(E)- This will be a challenge for the veteran pitcher, Moehler.

(David) - Who ya got, Brian Moehler or Brandon Lyon right now? It's gotta be closer to a tossup than Ed Wade would like...
(S) - Moehler gets the Cajun out and is up 1-2 on Byrd, but I refuse to be suckered by this. This proves fruitful as Keppinger drops a fly ball to shallow, shallow right field. The baseball gods must truly hate us.(E)- Right now, it looks like Byrd can be gotten out with high fastballs. I don't know if Moehler has the stuff to accomplish this.....These guys are professionals, right? Keppinger muffs a pop up by Marlon Byrd.
(D) - sigh...That's the problem with Kepp at second, though I'm not sure Matsui would have done better. This whole team is just scuffling right now.
(D) - At least Berkman had a good day at Round Rock.(E)- Amazing. Moehler escapes with an around the horn double play. Best part? No Woody Paige in this around the horn.
(S) - Kepp immediately redeems himself by sticking it through on a double play with Byrd taking him out.
End of the Eighth
(S) - Now would be a perfect time for Carlos Lee's luck to turn aroundTop of the Ninth
(D) - When you listen to XM Radio games, you always get the home team feed. Driving around the other day, I had to listen to the Cubs guys and they were talking up how well Lee does at Wrigley historically. That hasn't seemed to help him in this series, though.

(E)- Carlos Lee spares us the suspense and pops up on the first pitch. Hunter has his first two hit day of the season though. We have life! Wow. Geoff Blum. Thanks for playing...strike one. (S) - Alas. It does not. Pence gets lucky on a blooper/error for single, though. I refuse to get excited, though, because Geoff Blum is now charged with not botching that bat.

(E)- There's a break! Hunter in scoring position with the steal. Cubs' catcher, Hill, can't handle the pitch and makes no throw.

(D) - Hunter has looked like he's turning it around at the plate. With Berkman coming back, the offense could be decent. COULD being the key word.
(S) - GEOFF BLUM I LOVE YOU.(E)- BLLLLLLUUUMMMMMMM!!!!!!!!! Rock your body, right....Geoff Blum's back, all right! (Blum has been listening to the Backstreet Boys this week to get his mojo back.) Manzo is fighting off a tough pitcher. Guarantee the Marmols of the AAA world are few and far between.
(D) - That explains why Blum knows the words...it does not excuse you, Evan, from knowing them as well...(E)- I had to, um....Google them really quickly...yea...that's it...
(D) - GEOFF BLUM!! Who would have thought this game would be tied on a Hunter steal and a Blum double?? What's next, Moehler gets the win??
(S) - Tommy Manzella, I do not blame you for striking out swinging.
(D) - What was that, his third strikeout of the game? Q also struck out three times. That's a whole lotta nothin from those two spots in the lineup.
Middle of Ninth
(S) - I now am petrified that this will become a fourteen inning affair that ends badly for us.
(D) - Fear not, Moehler's good for at least 10 more innings.
(D) - PS, kudos to Evan for getting his article listed on Baseball Think Factory for the second time this week.
(E) - I owe it all to mentioning either Barry Bonds or Carlos Lee and something to do with him being fat
Bottom of the Ninth
(S) - WTF?! Why is Tim Byrdak in here?! What is Brian Moehler's purpose on the team if he is not going to continue to pitch here?
(E)- Prove my inner monologue wrong, Tim.

(E) - Great call, Skip! We had confidence in you the whole time!

(S) - I fully respect Manzella for calling Keppinger off of that IF. Thank you, Tommy. If that had been dropped, I would have had an aneurysm.
(D) - Could Manzella be the Anti-Everett? Tommy looks so awkward on so many plays, while Everett made everything look really easy. (E)- Damn you, Tim. Do NOT get two down with ease and then give up a run.

(S) - To put my nerves in context. I have spent most of this inning cleaning out my freezer rather the focus on the game. I just can't shake the feeling of an impending train wreck...and I don't want to watch it happen...but I have to at the same time.(E)- Mills has so much dead weight on his roster. Takes some getting used to after years in Boston.

(D) - Byrdak just wanted to up the difficulty level a little. He felt he was playing on Rookie mode and wanted to bump it up to All-Madden...(E)- Hahaha. I hope so. He should use a hit stick on Hill, in that case. Stros need to get out of this, go the 10th score some quick runs and then send the Cubs down in order because I want to watch the end of the Thunder/Lakers game....thank you Tim. I heard the best nickname ever yesterday for Kevin Durant: The Durantula. Thunder have moved within 8 at the end of the third, in a 64-56 slugfest.(S) - Awesome, after Arnsberg's visit to the mound Byrdak misses by an easy three feet.
(S) - Realization: This will probably the longest post in TCB history.
(D) - Don't tempt me. That sounds too much like a challenge for me not to write an epic 20,000 word post...(E)- Bill Simmons style.
(S) - Also known as novel?
(S) - Actually awesome: Byrdak then gets Hill out after falling behind 0-2.Top of the Tenth(E)- Michaels has two of the hardest hit balls by the Astros all season. Leadoff double. Let's play for one!
(D) - JMIKE!!! When can we replace Carlos for Michaels? Tuesday? With Kepp coming up in this inning, my confidence levels just inched up a tiny bit. Kepp is our best hitter right now
(S) - The baseball gods have to just love screwing with people. Jason Michaels just hit a pinch  double lead off the inning. They clearly just want to facilitate the most improbable box score of the 2010 season.(E)- Every little leaguer has fielded that ball and then thrown to third out of habit. I wish Aramis would have done that there.
(S) - Bourn sacrifices Michaels to 3rd. I hope this wasted out doesn't screw us over. But I feel like it will.
(S) - OH MY GOD?!?! WHY DID KEPP JUST SHOW BUNT ON THE FIRST PITCH?!?!(E)- I fear this situation so very, very much. How many ground balls have the Astros hit so far this season? 100? 150?
(D) - To mess with you. They are afraid of Michaels stealing home. Because he's our fastest runner...
(S) - Great. Kepp is getting IBB'ed and our hopes now lie with Pedro Feliz. I miss Lance Berkman so much right now.
(D) - Confidence level with Feliz and Lee up next? Not so high...Of course, Feliz promptly hits a sac fly to give us the go-ahead run.
(S) - Sac-Fly by Feliz and Michaels scores!!!!!!!!! I don't believe it. If Carlos Lee does something hear I will be convinced that I have fallen asleep on the couch and am dreaming.

(E)- Feliz had played for a winning team for so long, he apparently remembers how to execute. I don't know if there's any merit to that statement, but it feels good to write it. Now I know how Richard Justice feels..

Bottom of the Tenth

(E)- Pinch Hitter, Cajun, and Byrd to hit for Chi Cubs...I fear Derrek Lee in a situation like this so best to send these guys down in order, Matt
(D) - Wicked slider. Wicked. Brad Arnsberg's first big Astros success story?

(S) - A filthy slider to get the first out of the inning against Fontenot. Lindstrom just has such dominant stuff. He makes me feel safe. Until he throws a ball three feet outside after I type that. And then ball in the dirt...and another. Damnit. Did I just jinx Lindstrom? Linstrom sucks. This kid has no future.

(E)- Lindstrom, wearing number 22, trying to pitch like the former wearer of that jersey number, Roger Clemens...Time to stop trying to get him to chase. Throw a heater. Piyyaaaaaaa! Two outs! A double delight as he strikes out both Cajuns!
(D) - I wonder why the Astros haven't retired No. 22 yet...

(E) - The Walgreens' pharmacy down the street from the ballpark already has...
(S) - Lindstrom gets a called third strike for out number two against Theriot!!!!!!!!! One out away.