Let's start things off by admiring a thing of beauty...the Astros WPA graph from Thursday: 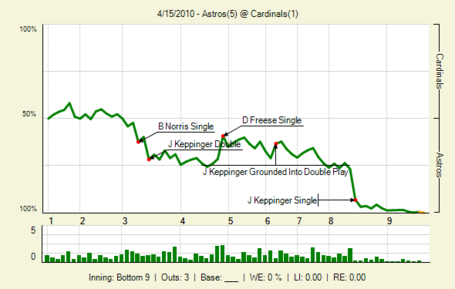 Isn't that pretty? The Astros had the WPA advantage for almost the entire game. Notice who else was listed on there a bunch? Jeff Keppinger. I voted for him to be the Three Star player of the game over at FanGraphs. If you haven't gone over there, that's a fun little feature. Wednesday's game saw Brad Penny as the Three-Star, Michael Bourn as the Two-Star and Ryan Franklin as the One-Star Players of the Game. Apparently, more Astros votes are needed...

Bud Norris - Setting a career high, Bud struck out nine batters in five innings on Thursday and earned the first victory by a pitcher this season for the Astros. How did he do it?

Last time we talked about Norris, I noted that most big league pitchers need more than just two pitches to succeed as starters. Bud obliged us with three solid pitches on Thursday. He threw all three of them pretty effectively, getting strikes on over 60 percent of his pitches.

His changeup was the only pitch to fall under that strike rate of 60 percent. even then, Bud got a ton of swing-throughs on the pitch. It's easy to see why. Looking at the differential between that and his fastball, it doesn't look like the change would be that deceiving. It's basically a fastball he took a little off of. But, when you start to look at the average movement, that's when you can see why this was a devastating pitch. The horizontal break was almost identical to his fastball. Both the change and the four-seamer break in on righties. The vertical drop is where you see a ton of potential. Look at the four-seamer. HIs average vertical break is at 8.23, which means the ball stays up in the zone pretty good. Not like Roy's rising fastball the other day against Philly (which averaged 11 and change inches of vertical change). The change only has 3.24 inches of vertical change. That means the ball is still up like a fastball and doesn't break as much as you think it would. At the same time, for a pitch that looks very similar to that four-seamer, the change drops five inches in the zone. That's pretty tough on a hitter.

Is it any wonder, then, that Bud got eight swing-throughs on the fastball? Guys were probably late because of the change or expecting the ball to move differently than it did. Either way, it was a good outing for Norris.

How did he do speed-wise? Was he laboring ever? Let's look at the speed chart: 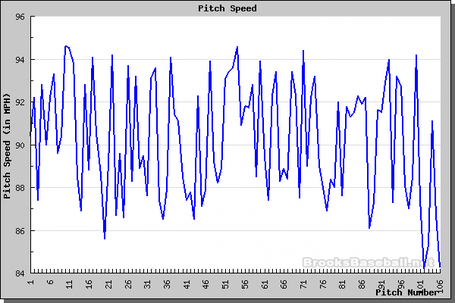 There is a slight decline here, but he stil hits 94 when he needs to in the fifth. From this graphic, it looks like Bud was never really laboring in the game and thus wasn't at such a risk of an arm injury. You can see him getting tired as the game wore on, but there were no significant drops in speed here. 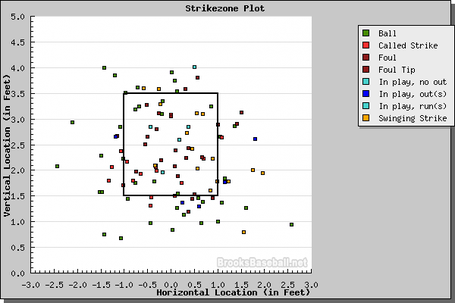 Looking at the strike zone plot for Norris, you can see that he was still wild. He worked down in the zone a lot and tried to hit that low and outside corner, where he got four swing-throughs. He also was able to climb the ladder a few times for strikes, but all in all, Bud showed good control of the strike zone. There are some really strong clusters there, but nothing to indicate a preference on where he likes to throw the ball.

Norris got in trouble in the fourth inning when Lee dropped that fly ball. He had to throw at least 10 more pitches to get out of that inning or else he'd be the third Astros starter this week to pitch into the sixth inning. As it is, I was really glad to see Norris throw a healthy and dominant game. If we can just convince him that he's pitching against the Cardinals every time. Where's a psychologist when you need one?

Sidenote: I'm including this poll, because there seems to be some interest in talking about the minor league games each day. Do you want an open thread each day to talk about minor league games? Would that be something you're interested in? Let us know.

Mills Watch: Thursday saw the Astros skipper bat his three best hitters in the top three lineup spots. Bourn, Keppinger and Feliz have been the most consistent hitters the Astros have had this season. It also meant dropping Pence down in the batting order. Much was made about Geoff Blum's comments earlier this season about a manager telling you where you're going to hit regularly and how important that is for a player. It's good to see Mills break from that here, however. The team was struggling. You have to do something. Dropping Pence down in the order is something he's tried to do before and did quite a bit in spring ball. I see a confidence in this move that is reassuring. Our skipper is in charge. Now if only the Astros bats could wake up...

I also find it interesting that Mills gave Johnson a start against a righthander in Lohse and he came through with a 1 for 4 day at the plate, scoring a run and striking out once. Mills has said all along that this won't be a straight platoon, but since Johnson and Feliz are both hitting fairly well (they both have wOBAs of one point off of .268). That's not a great number, true, but it's better than what Geoff Blum has thrown out there. Give Johnson a little time and he'll hit for a little more power. I'm still not convinced he's a 30-homer guy, but he can hit better than what we have right now. Isn't that all that matters?

Comment of the Day and Leaderboard: Here are your comment leaders for Thursday's series finale against the Cardinals. Kudos for newbie Jay Lopez for making the list:

First, two of our own Nostradomii here at TCB seemed to predict the win. From titansfan4ever:

Can I call em or what?

Bud pitched his heart out & the sticks came alive. We’ve got to figure out a way to keep Kepp in the game…he’s hot right now!!

He was referring to this comment in an earlier story:

the sticks have got to come alive…..but I think that we just might get our 1st win today.

Of course, they DID both go 1 for 8 on Thursday and the Astros won to bring their record to 1-8. I'm a little freaked out.

Now, for my favorite comments from Thursday:

Bud Norris’ fastball is so fast that it makes the batter feel as though they’ve been kicked in the face. Not surprisingly, it’s called a roundhouse fastball.

You’re fat, can’t hit right now, and still can’t play defense. I am so thrilled you get paid $18.5 million to do all that.

Those were my two favorite, anyways. I'm a sucker for Bud Norris facts and that was a doozy. And, making fun of Carlos Lee if fun to do right now. Stephen did an excellent job of it there. Only way it could have been improved is if he had made a 'fly ball hitting Lee in the head' reference.

But, the comment(s) of the day weren't any of those:

Hi, my name is Rich and I'm an Astroholic.

Walks, Strikes and the Astros: I've been thinking more about walks, strikes and the Astros. Someone tweeted the other day about how there are two players right now who have more walks than the entire Houston team. This worries me and should worry you. After all, this was supposed to be a point of emphasis with Brad Mills. Instead, guys are flailing away like they're putting out a fire. Only Jeff Keppinger has walked with any regularity. So, why do I bring this up? I don't think the Astros have a choice in the matter.

No wonder they can't walk. At the same time, this is the scariest thing I've found about this offense. Pitchers are so unafraid of these guys that they can just pump in strikes and know these guys won't hurt them? This would have never happened if El Bufalo were alive...

Stuff to Watch For: We were recently contacted by the guys at Deep Leagues. They run a website that focuses on players a little further down the food chain from Joe Mauer and Hanley Ramirez. Instead, they focus on 'fantasy baseball from the perspective of leagues where the trick to winning is purchasing players who the “main” fantasy writers never discuss (i.e., players like Reid Brignac, Colby Lewis, or Kevin Jepsen).' They also discuss the minor leagues, the draft and other baseball stuff. Sounds right up my alley, huh?

That's just one example of some really nice content these guys at Deep Leagues are putting out. I hesitate to link to it just because I don't want to give the other guys in our TCB fantasy league this kind of edge. But, I guess my team is good enough to win without having inside information too. Go check out their site, or wait until I link to their draft content again in upcoming weeks.