We have an early game today, so you're getting all the news and notes fit to print a little earlier than usual. I was at the Cardinals game last night, and will have a story up Friday afternoon with impressions from my first trip to Busch Stadium. So, look forward to that. In the meantime, let's break down yesterday's game.

Brett Myers - A very encouraging start for the Astros No. 3 starter. Working against one of the hottest pitchers in baseball (Brad Penny), Myers was able to put a 2-run first inning behind him and throw up goose eggs the rest of the way. What was he throwing, you ask?

One of the things I wanted to look at was if the Cardinals radar gun was slow, based on Myers previous start in MMP. After all, that was the concern with Wandy's fastball velocity. Last Wednesday, Myers averaged 89.69 MPH on his fastball. This Wednesday, Myers sat at 88.97 with a max velocity of 92.2. Considering he only got up to 91.8 last week, it doesn't appear he was shortchanged by the Cardinals gun. However, we are only dealing with 23 data poins this week and 22 last week, so there's probably not a lot of statistical significance yet. It does seem to indicate that Wandy just may have not had his best stuff on Monday.

The pitch that was really working for Myers was the curveball. Breaking down and away from righthanders, Myers got five swing-throughs with the pitch out of 36 that he threw. He really worked the bottom of the zone with the curve and was able to throw it for a strike 66 percent of the time. His strike numbers were down in this game, as he didn't get to 70 percent strikes on any of his pitches, like he did against the Giants. The pitch that seemed to give him the most trouble was his sinker. It had a ton of horizontal break, which may have been the problem for Myers. Interestingly enough, the two-seamer actually got a swing-through despite its wildness and got to the plate faster than his fastball (the last column in the above chart).

Myers was definitely throwing harder in the first innings than he did in the back four, but he was also the first Astros starter to complete the seventh inning this season. Here's his velocity chart from the game: 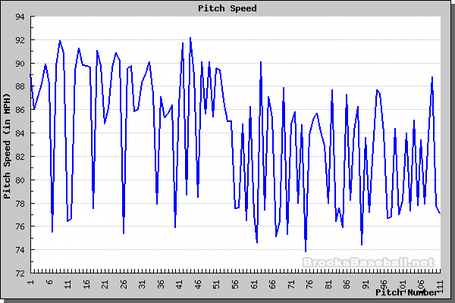 Notice he was clearly tiring as the game went on, but was still able to get Nick Stavinoha and Skip Schumaker to strike out in the seventh to end a threat. Myers never topped 85 MPH with any pitch to Stavinoha, and during the nine-pitch at-bat with Schumaker, was only able to hit 89 once before striking him out with the curve. He also got Albert Pujols in the sixth inning with a 78 MPH curve.

More importantly, Myers threw over 100 pitches in both of his last two starts. As long as he can keep throwing this many innings, the Astros will know at least once every five days, the bullpen can relax a bit.

Speaking of the bullpen...

Brandon Lyon - He threw 18 pitches but didn't break 90 MPH with any of them. Lyon also didn't get any swing-throughs, but throw 11 of his 18 pitches for strikes. More importantly, Lyon broke out the oft-discussed cutter for the first time this season. Though he only threw three of them, the pitch did dive away from righthanders, while both his four-seam and two-seam fastballs dive in on the hand of righties.

TIm Byrdak - Three pitches, one out. That's all Byrdak needed to get his man. More surprisingly, this was the first time Brad Mills has used Byrdak as a LOOGY. Since I don't have much else to say, I'll pose this question to you: is Byrdak more valuable as a LOOGY or as the one-inning reliever he's been used as to this point?

What's In a Pitch?: Lots and lots and lots of pitching information hit the web in the past week. This is going to be a short notes column, so we'll hit it with some heavy stuff. First up? This excellent piece which discusses figuring out how to better classify PItch F/X data. I'll try to use this terminology more in the future when I discuss the data from Brooks Baseball. A nice companion piece is this one, talking about the changes to the Pitch F/X data this season.

Your question from this section: which pitch names do you feel most comfortable with? Would you rather call something a 'riding fastball' or a 'four-seam fastball?'

Next up are a couple great articles in a series on sinkers and ground ball rates. I know it's the sidearm angle that creates so many ground balls for some of those guys, but I'm not sure I understand the reason. Is the ball breaking differently when it comes to the plate horizontally than if it comes from three quarters or overhand? Give me some time to puzzle this over (or if you want to try and explain it to me in the comments, I'd welcome it). Of the five best pitches at getting ground balls, four of them were curveballs. That gibes with what we have seen from Wandy's curve generating a ton of ground balls. I was surprised to see Fausto Carmona on the list, but really more interesting was the fact that most of the guys on this list weren't very effective. Chris Jakubauskas was put on waivers by the Mariners because he couldn't find the strike zone consistently. Carmona has been mediocre the past few seasons, but that could be due to the Indians infield defense. Of course, Gio Gonzalez and Yovanni Gallardo are some of the best young pitchers in the game.

The last article discusses ground ball rates. I agree totally with the point about ground ball/fly ball ratio. It makes much more sense to deal in percentages of total outs than in a ratio that excludes line drives. My only complaint would be about the minor league data. While those box scores do have ground ball/fly ball numbers, they're based on outs made and not total ground balls or fly balls. So, to effectively calculate these rates, i have to go through the recap manually. It's a pain, but I do it for you, dear readers.

The last article I wanted to point to was this one about whether a starters fastball improves once he moves into the bullpen. It was published a few weeks back, but it does mention Felipe Paulino as one of the few starters who's fastball does better in the rotation than in the 'pen. That definitely tracks with what we've seen.