Maybe, after giving up three runs in the first inning to the powerful Phils, Bud Norris clicked his cleats together in a vain attempt to return to Round Rock, or Memphis, or New Orleans, or any other AAA outpost where he may have been able to get by with his lack of control. Norris had a bookend start: he walked Jimmy Rollins to start the game, and he exited after walking pitcher J.A. Happ.

I'm not Nostradamus, and I don't like to predict ill of my team, but after his last exhibition start against Toronto, I texted Stephen and I said I fear for our young starter's life against Philadelphia. Couple his lack of apparent readiness with the already downward slope of the Astros, and one did not need to read the tea leaves to understand that this was going to be a tough one for the Astros to win regardless of who was pitching for us.

It doesn't help that the guy who was pitching for us was unable to locate any of his pitches, despite a huge strike-zone all night from home plate umpire Tim McLelland. Looking at his pitch f/x data, it was apparent to the naked eye that he was worst with his fastball. That perception is backed by the data, which showed that Cudly Budly threw his heater for a strike a mere 42% of the time. He missed wide right a staggering amount of times: 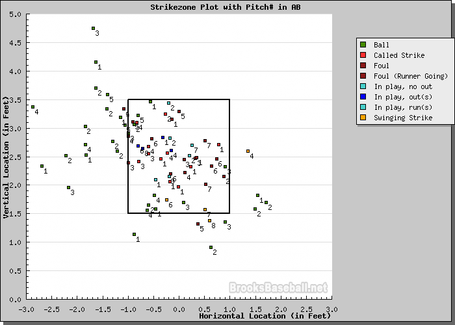 This all a part of the learning process for Norris, and the schedule makers certainly didn't help matters. The Phillies are a patient, hard hitting team. At this point, Bud throws two pitches with consistency and mixes in a change up every once in a while. It would have been difficult for him to have success with that repertoire especially when he fails to locate his pitches early in counts. Getting behind in the count against a veteran team who knows that  you only have two offerings is a disaster ready to happen.

What really tells me that our offense is putting a little too much effort into their at bats is the season thus far of Carlos Lee. For a guy who struck out at a career low rate last season, Lee has looked over aggressive at many times this season through four games. With Lee and Hunter Pence engaged in a battle to see who can go the longest without putting together a good at bat, this Astros team was bound to come out of the gates slowly. The injuries to our two best middle relievers and sub par starts from Norris, Bretty Myers, Wandy and Roy haven't made things any easier.