Thoughts on the Sloan Sports Conference at MIT: What can baseball fans take away from the nerdery?

Share All sharing options for: Thoughts on the Sloan Sports Conference at MIT: What can baseball fans take away from the nerdery? 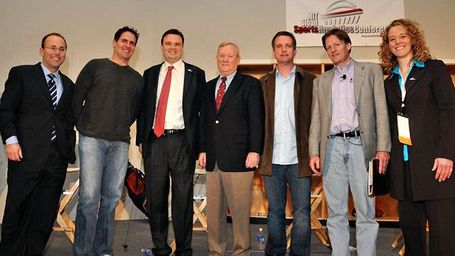 To me, there's nothing better than discussing sports in an intelligent, critical fashion. Some people love debating politics, or recapping the previous night's episode of American Idol or The Office. That's all good and well, but personally there's just something about athletics played at its highest levels that brings out my inner chatter box.

What's even better than me talking sports is listening to people who are smarter than myself do it.This past weekend's MIT Sloan Sports Analytics Conference was one of those summits of the who's who in American sports that had me absolutely giddy as someone who can't get enough of creative thinking in the realm of sports.Two specific panels from the Conference were of particular interest to me: the one dealing in Baseball Analytics and What Geeks Don't Get: The Limits of Moneyball.

On the baseball side of things, we know that statistical analysis of the sport has been gaining momentum not only with fans like ourselves, but in the mainstream mediums as well. When I heard Joe Morgan mention OBP last year, I nearly fell out of my seat. Truly, by hook or crook, sabermetrics has gained a foothold, one that it is not going to be giving up. Whereas certain teams had a strong competitive advantage at the outset of the statistical revolution, most if not all teams utilize advanced statistical analysis in some form or fashion in their decision making.

For those teams like say, the Astros, who probably don't take the analytical approach to heart, they run the risk of being left behind the learning curve. The game of baseball itself is complex, mutli layered and difficult to grasp on it's most fundamental levels. Finding the right combination of players to field a successful major league team is a task left to men who boast advanced degrees from Ivy League schools and scouting personnel who have earned their stripes watching more hours of amateur baseball than anyone should be made to. I would like to think that the Astros have begun to meld these two schools of thought together, but something tells me that they have not. I'm not saying that the organization hasn't improved itself over the past couple years, but I seriously doubt Tal Smith and Ed Wade are at the forefront of developing new methods to analyze and evaluate baseball players.

It's a culture of thinking, when you boil it down to it's most base level. Starting from the top, how front office personnel look at players and conduct business is ingrained on an organizational wide level. This culture begets another sort of culture on the field, whether it be winning or losing.

The Astros have seen what their previous culture got them- poor performance on the field and inefficiencies throughout the minor league levels. Bad drafts, poor minor league records and an aging major league team are the after affects of this sort of mismanagement. I hope, hope, hope that the Astros take the sort of analysis which the presenters at the Sloan Conference undertake to heart.

As we head into the second decade of this century, it's readily apparent that objective, statistical based analysis works to a large extent and combined with scouting enables organizations to take advantage of market inefficiencies to yield a strong on the field product. Our Astros may be behind, but they doesn't always have to be that way. They need only look across downtown Houston to see that....

My second area of interest in Sloan Conference dealt with the extent to which professional sports franchises can utilize statistical analysis before a point of diminishing returns occurs. The panel was moderated by Michael Lewis, and had such varied participants as Dallas Mavericks owner Mark Cuban, Houston Rockets GM Daryl Morey, and ESPN's Bill Simmons.

In all honesty, I looked forward to hearing about the exchanges of these three men much more than Rob Neyer and other baseball executives from the Baseball Analytics panel. Simmons is a thoughtful, speak from the heart sort of guy, whose writer/fan perspective is unique. He  has made a career of second guessing NBA GMs and dishing out strong criticisms on how teams are run in the Association.

Cuban is best known for his theatrics on the sidelines, but the fact remains that the man is a billionaire and is incredibly intelligent. His Mavericks are at the fore of statistical analysis in basketball.

The Boy Wonder, Dork Elvis, call him what you want, Daryl Morey is the Billy Beane of the NBA. The first "stat" GM the league has seen, Morey has been GM of the Rockets since 2006 and under his watch, the team had won fifty games in each of his first three seasons, and are playing respectable (if not frustrating) ball this season sans Yao Ming. As an MIT grad, Morey was instrumental in organizing the whole sha bang.

One topic that has driven sabermetricians mad seemingly forever is the question of clutch. Can a player be clutch, or are performances in important, high leverage situations dependent much more on circumstance, match ups and other external factors?

We don't make any decisions based on the belief of that.

This sort of falls in line with what those in the baseball saber-community have believed for years. So, not an incredibly surprising answer. Mark Cuban, for what it's worth, said the Mavs do make decisions based on the idea of "clutch".

Without having done any real research on the subject, my own experiences and observations watching basketball lead me to believe that there is such a thing as clutch in the NBA. Or, maybe not clutch, but there certainly are players and teams that are able to put themselves in favorable situations at important junctures in a game.

While Kobe may miss 7/10 game winning shots, it is readily apparent that the Lakers and other elite teams win close games for a reason that other teams are unable to. It's not so much clutch as it is poise, composure, and experience. Players like Chauncey Billups earn nicknames like "Mr. Big Shot" from making late second plays, but to me, it's as much about his not turning the ball over and putting his teammates in optimum situations to score that separates him from other players.

I don't think these characteristics matter as much in a sport like baseball, where the actions are much more instinctual. Jason Michaels experience isn't going to gain him any advantage in the batters box, and the inexperience of Justin Upton probably won't hurt him more now than it will when he is 30. That's just a difference in the sports, or at least I find it to be that way.

Advancing the methods by which professional sports organizations make decisions makes for great discussion for fans, but is also a necessary process for the organizations themselves. Progress is unavoidable and it's best to at least stick your toe in and see what the fuss is all about. Teams have everything to gain, but nothing to lose by doing so. Hopefully gatherings like the Sloan Conference will increase the visibility of statistical analysis while simultaneously driving the continued improvements of the underlying methods of evaluation.