We've reviewed the relief prospects you might see in 2010. Now, let's get into the real bullpen nitty gritty. How about we look at some of the current Astros relievers with PItch FX data. First up is Alberto Arias.

For those of you unfamiliar with him, No. 50 is listed as 5-foot-11, 155 pounds. The 26-year old was signed out of the Dominican Republic by the Colorado Rockies in 2000. Arias made his big league debut on May 1st, 2007, pitching 3 2/3 innings in a 7-4 victory over San Francisco. Arias allowed one hit and no earned runs, striking out one and walking another to earn his first big-league victory. Unfortunately, it would be his only decision in six appearances that season.

In 2008, Arias threw 13 2/3 innings in 12 appearances for Colorado before being placed on waivers. Ed Wade and the Astros claimed him on July 31st but Arias spent his first month with Round Rock, where he pitched 23 2/3 innings over eight appearances and three starts. Arias was effective enough with the Express (5.7 K/9, 8.0 H/9, 3.0 K/BB) that the Astros called him up on September 8th once rosters expanded.

Arias did throw eight innings for the Astros in 2008, starting two games and throwing in relief in a third. His 6.75 ERA didn't impress anyone, but his eight strikeouts in those eight innings certainly turned some heads. He allowed a ton of hits, but his BABiP was a ridiculous .458, meaning he was EXTREMELY unlucky.

In 2009, Arias didn't break camp with the Astros, but only pitched 16 1/3 innings with the Express over four appearances and three starts. On May 6th, Arias was called up and stuck with the big league team until August 24th, when he was placed on the disabled list with soreness in his right knee. Team medical director Dr. David Lintner performed a successful arthroscopic surgery to remove a small fragment of bone from the back of his knee.

So, what did Arias look like when he did pitch in 2009? Let's go to the Pitch FX data, courtesy of TexasLeaguers.com.

Let's start off, as usual, with a look at what exactly Arias throws:

His four-seam fastball sits at 93 and touches 96. His curve is his second pitch and he uses both of them about 80 percent of the time. His average curveball is about 12 MPH slower than his four-seamer, which is a pretty sweet changeup. Arias does throw a two-seamer, and gets it up there almost as fast as his four-seamer. We'll look at these two pitches more in depth in a little bit, so just hold on to that information. His slider is a little slower than you'd expect from a guy with Arias' kind of velocity.

What kind of success does he have on the pitches? I'm glad you asked.

Arias is remarkably good at throwing his four-seamer for a strike. His other pitches are hit or miss, which may explain why he was put on waivers in the first place and why he relies so much on his fastball. He also gets a ton of swings at his fastball, while batters seem to have clued in that he's a little wilder on his other offerings and don't really swing as much on them. Unfortunately, he didn't miss many bats with that four-seamer, getting just 4 percent whiffs. His curve and slider did get some swing-throughs. In fact, his curve got a swing-through almost half the time Arias threw it for a strike. That's a pretty good pitch.

Where is he throwing these pitches? 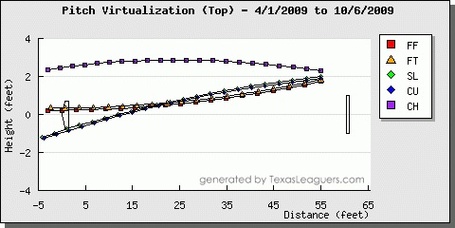 Ignore the changeup graph. It's based on just two pitches and is the definition of an outlier. Instead, look at the similarity between both the slider and curve and the two fastballs. Both sets of pitches have similar movement and are located at similar spots. Arias loves finding that outside corner with his breaking stuff and pounds the interior part of the plate with both fastballs.

This is actually shows a little of what I saw above: the Pitch FX cameras may have some problems categorizing Arias' pitches. The stats on the four-seam and two-seam fastballs are very similar, as are the two breaking pitches. Look at the pitches from the side. 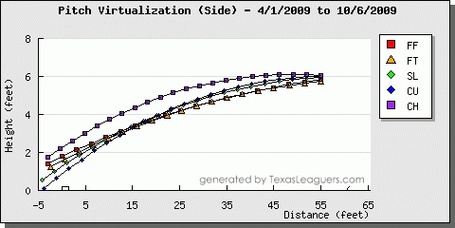 Here, there's a little difference between the curve and the slider. The curve dives down into the dirt a bit faster, but still doesn't deviate too much from where the slider is. The same can be said for the two-seamer. It breaks down a little more than the fastballs, but it's not very much of a difference. With the similarity in speed and in locations, it really makes Arias into a two-pitch pitcher.

Judging from his release point, it's not like he tips what he's going to throw. As you see below, Arias is pretty consistent with his release. 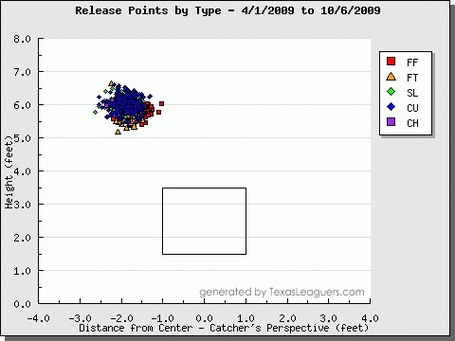 You could probably tell from pictures of his windup and delivery, but Arias is definitely a three-quarters guy. He has no problem hitting the same slot no matter which pitch he's throwing. So what's going on with these four pitches? Onwards to the movement chart. 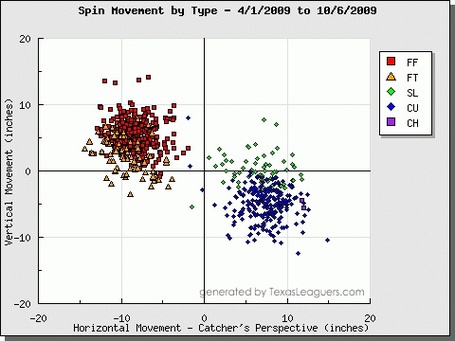 Now, things become a little more clear. There are two distinct zones where Arias hits with his movement. While his curveball has some definite downward plane on its movement, the slider stays up a little more. Now, considering how many were thrown compared to the curve, it could be a matter of random noise on that scatter plot. Those 'sliders' could just be curveballs that don't curve as much. Whatever the case, it's a pretty textbook pitch going by this guide here.

The fastballs, though. Too many of those look like splitters to me. I'm not suggesting that Arias throws a split-fingered fastball instead of his four-seamer, but judging by its movement, it does look to have a little more downward plane than your normal fastball. That 'sink' is what gives Arias an 18 percent groundout rate.

Interestingly, though, Arias actually got more strikeouts by percentage (18.8%) than any other outcome last season. I'm not sure exactly why this is still, but I can guess that we're dealing with a smaller sample size, batters who aren't ready for both his velocity and his erratic movement and a reliable fastball he can throw for strikes early in the count.

I'm not sure from this data whether Arias could possibly be a closer candidate in the future, but he does have an interesting repetoire. Anyone who can hit 95-96 with his fastball has a place in this Astros bullpen.

That's all I've got. If baggs wants to chip in with any thoughts on Arias' mechanics, I'd certainly appreciate it.