Share All sharing options for: Know your Astros Relivers: The Prospects, Part III 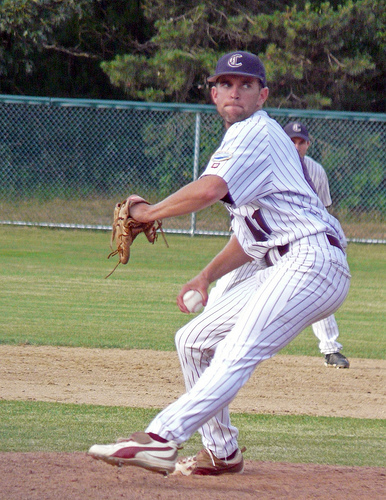 We have arrived at the third and final installment of the Pitch F/X data from the Arizona Fall League. Our last subject will be Danny Meszaros, a right-handed pitcher out of the College of Charleston.

For those of you unfamiliar with the 24-year old, he was drafted in the 48th round of the 2008 draft as a senior. In his one full season in the minors, Meszaros pitched 74 1/3 innings with an ERA of 2.91, 67 strikeouts, 20 walks and seven home runs allowed while reaching Double-A Corpus Christi last season after starting out in Lexington.

He is now one of 29 players to be drafted out of the College of Charleston, with the first being drafted in 1998 and 13 of those being drafted in the past two seasons. After a disastrous senior year (9.63 ERA over 18 appearances

and seven starts) where he gave up a team-leading 16 home runs and 19 doubles in 52 1/3 innings, Meszaros plummeted down the draft boards.

Still, the senior had struck out 62 batters in those 52 1/3 innings while walking 36. He was also coming off an unknown injury which caused him to miss the entire 2007 season. In his first two years with the Cougars, he was 15-3 over 40 appearances and 13 starts with an ERA of 2.78 over 132 2/3 innings. Meszaros struck out 120 and walked 48 during those first two years and gave up just eight home runs. He was also named a Freshman All-American in 2005.

What's interesting is that while Meszaros is listed at 6-foot, 190 pounds, this article on the College of Charleston's website suggests he could be shorter than that. The author listed his height at 5-foot-9. Now, that was two years before he got drafted and four years ago to this writing, but I wonder if he could have grown three inches in the meantime? Indeed, between the 2006 and 2007 media guides, Meszaros gained an inch. Whatever his true height, he has turned into quite the late-round find. Let's look at what the throws after the jump...

Meszaros threw 11 2/3 innings for the Peoria Saguaros with an ERA of 4.63 while striking out 15 and walking three. Over those innings, Meszaros threw 138 pitches in front of Pitch F/X cameras. Below is a quick breakdown of what pitches he threw.

Meszaros didn't have the hop on his fastball that Chia-jen Lo had or that he had at the College of Charleston, when his fastball sat at 95. However, he did get good movement on the pitch and has a very effective curve. His changeup wasn't used very often but, as you will see below, did miss some bats.

This next chart shows the percentage outcomes on the three pitches:

While he doesn't get hardly any swing-throughs on his fastball, his curve and changeup are pretty decent off-speed pitches. Again, going back to Harry Pavlidis' article I referenced in the Lo feature, you can see that none of the pitches are great in and of themselves, but Meszaros has one of the highest strike rates around. At .6739, his strike percentage would have ranked second on Pavlidis' list. Money quote:

With the extra movement, [the two-seamer's] a harder pitch to control than a four-seam fastball.

Here's a different way to look at his pitch movement: 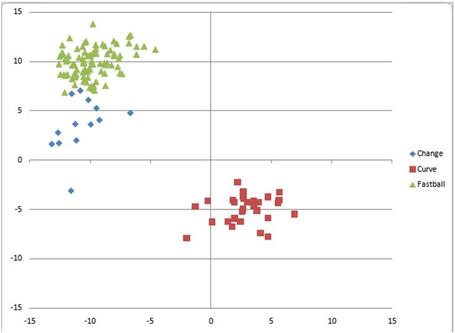 If we use this reference chart again, the first thing that jumps out is his fastball is actually more like a two-seamer. This helps explain the break into right-handers, and also helps explain why his splits are so skewed. If his two-seamer is so effective to righties, it makes sense that it wouldn't be as effective against left-handed batters. It also means that Meszaros should be able to somewhat maintain his .240 BABiP against righties in the future.

However, since he gets more swing-throughs on his breaking stuff than his fastball, I looked at what he threw for his 'out-pitch', or when he had two strikes on a batter. 48 of his pitches came with at least two strikes on the hitter. 30 times, he used his fastball while he used his curve 15 times and his change three times. Those percentages (62.5% FF, 31.2 % CU, 6.25% CH) show more reliance on the curveball as his out pitch than when he uses it normally. If you look at number of times used in two-strike counts to total times used, you get even more skewed percentages. Basically, Meszaros used his curve half the time on two-strike counts, while the fastball was roughly 1/3 of the time and the change was used one-quarter of the time.

Why does he work off his fastball to set up the curve? Let's look at the general movement of the two pitches.

The Break Y column shows the distance in feet from home plate when the pitch has its most break. Notice that both the fastball and the curve break about the same time. The Break Angle is an angle from 50 degrees to -50 degrees, with 0 degrees denoting a pitch with no break at all. This column is also a bit backwards from the other movement chart, since negative angles move away from a right-handed hitter and positive move towards. Notice that Meszaros' fastball bears down extremely hard on right-handers, while his curveball is almost exactly 12-6. The curve also has about a foot in 'hump' or break length, showing how much the pitch actually deviates from the straight line.

Looking at this, I can see why the curve works as an out pitch. If Meszaros uses his fastball as over 60 percent of the time and the curve and fastball break at about the same time, it must be hard to differentiate them, especially if a batter is only seeing him once a game.

So, what does this tell us? Meszaros uses a good sinker to set up his curveball and is effective at getting strikeouts with these two pitches. His changeup wasn't used in a small sample size in the AFL, but with its location, could also be an effective pitch to slow down left-handed batters. Throwing as many strikes as Meszaros does means he has the command to move up the system still and could find himself in Houston sometime this season. I don't think he'll break camp with the club, but I do think he will make an impact in 2010.

Next up in this series is a look at what some of the entrenched relievers for 2010 will bring. Pitch F/X profiles of Jeff Fulchino, Alberto Arias and Matt Lindstrom are in the hopper. Anyone else I should be looking at?